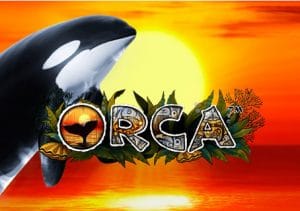 WHERE TO PLAY Orca SLOT

Based on the mighty killer whale, Orca is a 5 reel, 50 payline video slot from Novomatic. This aquatic-themed game comes with a bonus feature that awards an initial 10 free spins with extra wilds added to reels 2 through 5. Take to the water from between 50p and £50 per spin.

It’s not often that Novomatic produce a 50 payline game so Orca already has something in its favour. As far as visuals go, it’s not the most sophisticated slot you’ll come across – set against a sea bed backdrop, the pale blue reels include the usual lower value playing cards alongside a range of aquatic life.

The Mayan-style mask is the game’s wild (no, we don’t know what it’s doing in an ocean-themed slot either!). It replaces all other symbols apart from the scatter.

Orca also comes with a Free Games feature which is triggered by landing 3 of the whale’s tail symbol which is the scatter. In addition to a payout of 4 times your stake, you’ll also receive 10 free spins. On each free spin, an extra wild is added to reels 2, 3, 4 and 5 which can have a big impact, especially as the free spins draw to a close. Land the scatter symbol on reels 1, 2 and 3 during the feature and you’ll receive another 5 free spins taking your total to 15.

Orca may not kill your bankroll but the variance here is pretty high so some caution is recommended, especially as the minimum bet is relatively large given the 50 paylines.

If you have the patience and funds to cope with the swings, there’s plenty to enjoy here if you like Novomatic slots. Simply designed with one potentially big-hitting feature, Orca can help you swim off with plenty of sunken treasure if the sea gods are smiling. If you like whales, I highly recommend the volatile Great Blue by Playtech.