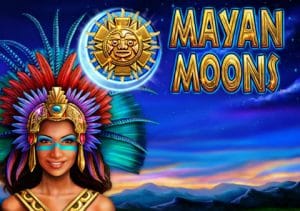 WHERE TO PLAY Mayan Moons SLOT

Based on the ill-fated central American civilization, Mayan Moons is a 5 reel, 20 payline video slot powered by Novomatic. The chief attraction in this historical themed game is the bonus feature that awards 15 free spins with special symbol transforming extras that offer payouts of up to 25 times your stake. Play from between 20p and £40 per spin.

Enclosed within the stone ruins of a Mayan temple, the plain white reels include a selection of objects related to the civilization that encompassed much of Mexico, Belize and Guatemala. Joining the lower value playing cards are golden bracelets and pan pipes which award up to 12.5 times your total stake, a golden mask which offers up to 15 times your stake and a pyramid which will get you 25 times your stake if you manage to land 5 on a payline.

The toucan bird is the most rewarding standard symbol – if 5 of these fly onto 1 of the game’s 20 paylines, you’ll be in line for a payout of 125 times your total bet. The Mayan woman, complete with multi-coloured head dress is the game’s wild – she replaces all other symbols with the exception of the moon which is the scatter.

Land 3, 4 or 5 moons anywhere on the reels and you’ll win 5, 20 or 50 times your total stake. You’ll also trigger the Free Games feature and be awarded 15 free spins. Any moon scatter that lands during these free spins (plus the original triggers) will be frozen in place.

Mayan Moons is a typical Novomatic video slot – the design is okay without offering anything too flashy and the backing track, bar the odd blast of pan pipe, is pretty generic. The features are limited but the extras on offer from the overlay symbols add a little spice to the bonus feature. The overall variance isn’t as high as some games from this developer either, sitting in the middle.

It’s not the most sophisticated game you’ll come across but for some simple, live casino style action, Mayan Moons does the job rather nicely. And if the moon aligns nicely, some very decent payouts are certainly possible. If you like the theme, NetEnt’s Gonzo’s Quest is recommended.