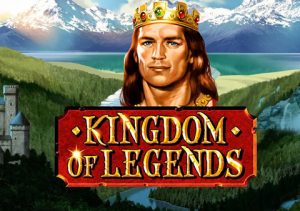 WHERE TO PLAY Kingdom of Legends SLOT

A medieval European realm is the setting for Kingdom of Legends, a highly volatile jackpot video slot from Novomatic. Not to be confused with the similarly title Kingdom of Legend (singular) this 5 reel game comes with a scatter pays game engine and a bonus feature that awards 10 free spins and a shot at landing those all-important jackpots. Play from between 10p and £50 per spin on all devices.

As soon as you fire up Kingdom of Legends, you’ll know that it’s a video slot from Novomatic. With castles and snow-capped mountains in the background, you’ll see lower value royal symbols spinning around the plain black reels. They’re joined by purses filled with gemstones, treasure chests brimming with gold and the royal couple.

Unusually for a Novomatic game, payouts are made scatter style rather than via the usual paylines. The more matching symbols land anywhere on the reels, the bigger the potential rewards.

The highlight of the gameplay is undoubtedly the Free Games feature – this is triggered by landing 3 or more of the crown scatter anywhere on the reels on the same spin. You’ll then get a payout of 3, 30 or 300 times your stake, 10 free spins and a shot at landing a bumper jackpot prize.

Before the free spins begin, 1 symbol will be chosen at random. Whenever this symbol lands, it will be locked in place. If there are enough symbols, a standard payout is made and the free spins continue. A new payout is then made on each free spin.

Each extra matching symbol adds to the payout with the goal to fill all 15 positions with the same symbol. You’ll then win that symbol’s associated jackpot prize. The higher value the locking symbol, the bigger the potential rewards.

Many Novomatic video slots are pretty feisty on the volatility front and that’s most definitely true of Kingdom of Legends. The variance here is extremely high. You could endure some very lengthy down spells. Trigger the Free Games feature, get a lucrative symbol as the sticky symbol and some very big wins are possible.

Kingdom of Legends has almost everything we want from a Novomatic title – slightly deranged looking character symbols, the manic bang and beeps soundtrack, simple gameplay and super high volatility. If that sounds appealing, you’ll certainly want an audience with this royal couple.