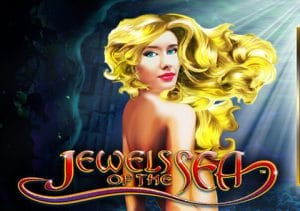 Jewels of the Sea: Demo

WHERE TO PLAY Jewels of the Sea SLOT

Go diving for sunken treasure in the depths of the ocean in Jewels of the Sea, a 5 reel, 720 ways to win video slot from Novomatic. It comes with a wild that doubles payouts as well as a bonus feature that can award up to 192 free spins. Join the Mermaids and dolphins, on desktop, mobile and tablet devices, from between 40p and £100 per spin.

Set on the ocean floor, Jewels of the Sea comes with a 3x4x5x4x3 game engine with winning combinations formed when the same symbol lands on adjacent reels. There are 720 potential ways to win in all which keeps the action flowing nicely.

Like many Novomatic powered video slots, the design here is pretty simple – joining the lower value A to 10 playing cards are a cartoon-style dolphin and a pair of mermaids. The blonde haired mermaid is the most lucrative, awarding 400 coins for a 5 symbol combination.

There’s also a wild – when it forms part of a winner on reels 2, 3 or 4, it counts as 2 symbols, doubling the number of combinations that will be paid. The more wilds that land, the bigger the potential multiplier on offer.

Jewels of the Sea also comes with a Free Spins feature which is triggered when at least 1 scatter lands on each of the 5 reels – when this happens, you’ll be given 8 free spins. If there’s more than 1 scatter on the row, it will create another winning combination and offer another 8 spins.

All told, it’s possible to land a combination of scatters where you’ll be awarded a bonus of 12 times your total stake as well as a whopping 96 free spins. You can also re-trigger more free spins from with a potential 192 free spins possible!

The design in Jewels of the Sea is nothing to write home about – we’d call it functional rather than a thing of beauty. The gentle backing track does match the theme rather well though. Where this medium to high variance game excels is in the bonus feature.

Combine multiple wild multipliers and Jewels of the Sea can deliver decent amounts of sunken treasure if the sea gods are smiling. If you like sea themed games, Novomatic’s Red Lady is a pirate adventure you don’t want to miss.