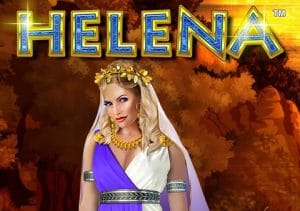 WHERE TO PLAY Helena SLOT

Head back to the land of the ancients in Helena, a Greek myth and legend-themed video slot from Novomatic. Based on Helen of Troy, it’s a 5 reel, 10 payline game that comes with double wild wins and a free spins feature where all payouts are trebled. Join the action from between 40p and £80 per spin.

The daughter of Zeus was supposedly the most beautiful woman in the world – the video slot version of Helena may not quite win that accolade but this is a pretty attractive game, especially for 1 that comes from the Novomatic stable.

A golden harbour forms the backdrop to the reels – those reels include the usual playing card values as well as plates and vases, a snake-style brooch, a helmeted-warrior (Achilles) and a floppy haired Greek (Paris – Prince of Troy). Land 5 of the two men and you’ll pocket an award worth 75 times your total stake.

By far the most potentially rewarding symbol on show here is Helena herself – she is the wild and substitutes for all other symbols apart from the scatter. Whenever Helena forms part of a winning combination, that payout is doubled. The only exception is if a payline features only wilds. Those payouts are pretty handy too though – land 2, 3, 4 or 5 wilds on a payline and you’ll win a prize equal to 1, 20, 200 or 1,000 times your total stake.

The Greek city scene is the scatter – 3, 4 or 5 of these anywhere on the reels on the same spin will get you 5, 20 or 100 times your stake. They will also trigger the Free Games feature and with it, 15 free spins. All winning combinations landed during the free spins are boosted by a 3x multiplier and trebled.

If you get a winning spin with the Helena wild involved, she will double the payout giving you, in effect, a 6x multiplier. You can re-trigger more free spins here too giving you up to 30 free spins in total.

The visuals in Helena are a bit better than we’ve come to expect from Novomatic games. They somehow manage to make the human characters look slightly deranged though. Still, they’re a step up from many of the developer’s titles. Likewise, the backing track which has a military feel in the base game before morphing into something much more jaunty during the free spins.

Those free spins offer the best route to bagging a decent win thanks to the trebling, and sometimes 6x, multiplier. We managed to collect over 450 times our total stake after the multipliers worked some magic. The overall variance is in the medium to high range.

We enjoyed Helena more than we expected. It looks and sound good for a Novomatic video slot and the feature round offers plenty of potential. Ancient Greeks are plentiful in the online casino world. Helena is a solid addition to the field. Alternatively, Novomatic’s Mighty Trident is a good option.