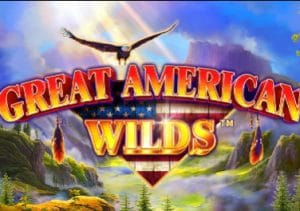 You’ll also have a shot at landing 1 of 5 animal-themed progressive jackpot prizes. What else can you expect from this volatile wild adventure? Find out in our Great American Wilds review.

Many of Novomatic’s older releases were very simple affairs. That was true of both the design and gameplay. More modern releases have been given something of a makeover and that’s true of Great American Wilds.

The visuals are better than older slots (more on this below) and there’s plenty of variety on offer from the features. You’ll find stacked symbols, streak respins, free spins and progressive jackpot prizes.

When the Epic Xtra Stax feature triggers, all the positions on a reel will be filled with the same matching symbol. This can be anything, including scatters or wilds. It’s possible to land Xtra Stax on more than 1 reel on the same spin which can lead to some potentially large combinations.

Land 4 bonus symbols on a base game spin but just miss out on the all-important fifth and you’ll trigger the Respin feature with 1 respin awarded. The bonus symbols are held and a respin follows. These respins continue if a new bonus symbol lands or you fill the middle 3 reels with bonuses. If you do land a new bonus, you’ll then go on to play the Free Games feature.

The silhouette of the howling wolf is the bonus symbol. This can appear on reels 2, 3 and 4 only. Land 5 or more bonus symbols on the same spin to trigger the Free Games feature.

You’ll receive between 7 and 20 free spins depending in the number of triggering bonus symbols. You can land Xtra Stax during the free spins, as well as the Respin feature.

Things are slightly different in the Free Games feature when it comes to the Respin feature. The respins are triggered if you land 1 of the 5 animal symbols fully stacked on reel 1.

The Great American Wilds slot also offers you the chance to land a progressive jackpot prize in the Jackpots feature.
You can see the size of each of the jackpots in the panel to the left-hand side of the reels.

To win a jackpot, you need to land a screen full of the same animal symbol – there’s a minimum amount for each of the 5 jackpots:

The game engine in Great American Wilds is nice and straightforward. The 5 reels and 4 rows combine to offer 50 paylines. Stakes range from between 50p and £100 per spin. You can set up an indefinite number of autoplay spins. There’s no way to create win or loss limits though so pay attention to those autoplay spins.

The RTP is 95.17% which is actually acceptable for a progressive jackpot slot. Great American Wilds might not have the super high variance found in some Novomatic slots. It’s still fiery enough to pack a punch though. The volatility here is high without being stratospheric. On a scale of 1 to 10, it’s an 8.

With a hit frequency of 40.34%, over 4 in 10 spins will result in a winning combination. The max win per spin is 500 x your total bet. However, this can go much higher with the jackpots.

If we were creating a Premier League table of top online slot designers, Novomatic wouldn’t be challenging for European action. They have certainly upped their game with recent releases and Great American Wilds is easier on the eye than many old slots.

A forest shrouded in mist forms the backdrop to the reels. There you’ll find the usual A to 10 royal values as well as 5 more rewarding wild animal symbols. In order of value are the cougar, mustang, bison and grizzly bear. The golden eagle is the most lucrative symbol, paying 10 times your bet if you land 5 across a payline. There’s an American flag which is the wild symbol and replaces all symbols except the bonus scatter.

They’re not the sharpest visuals you’ll see but they’re clear enough against the plain, dark backdrop. The standard Novomatic game interface is on offer in Great American Wilds. You can adjust bet levels easily without having to leave the game page.

Click on the menu for the paytable and other information. It’s all intuitive and easy to navigate. Finally, the Great American Wilds mobile version works rather well. The bright design is simple to follow on the smaller screen

This trip to the great outdoors won me over. The simple imagery might not have the greatest clarity but it’s clear and easy enough to follow. The gameplay delivers more than enough action to keep things interesting too. The Xtra Stax, free spins and respins extras can be well worth hitting.

The Great American Wilds variance is high enough to deliver some big rewards too with the Eagle Jackpot guaranteed to pay at least 1,500 times your total bet. If you fancy getting in touch with nature from the confines of your armchair, Great American Wilds is a decent enough place to start. If you want outdoor action, Giant Grizzly by Playtech is worth playing – as to is Raging Rhino Megaways (by WMS).

The variance in Great American Wilds is in the high category. It’s not as volatile as some Novomatic slots but still pretty feisty. We’d put it at around 8/10.

🥇 What are the Great American Wilds bonus features?

There’s a good selection of features available including up to 20 free spins. You can boost these with streak respins too. There’s also a chance to land 5 progressive jackpot prizes. In short, there’s plenty going on.

🎰 Is there a Great American Wilds mobile version?

Yes. You can play the Great American Wilds slot on a mobile device. It works pretty well on the small screen too. You can also opt for tablet or desktop device play.

⚡ What are Xtra Stax?

When this feature hits, all the positions on a row or rows will be filled with the same matching symbol which means some potentially tasty combinations.