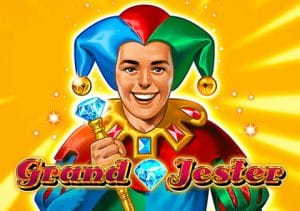 WHERE TO PLAY Grand Jester SLOT

Free spins and a potential progressive jackpot are the highlights of Grand Jester, a classic fruit machine re-boot from Novomatic. Featuring simple design and played using a 5 reel, 10 payline game engine it comes with a bonus feature that awards up to 24 free spins with expanding wilds that remain in place on the free spin that follows. Fill the screen with wilds to trigger the progressive prize. Stakes start at 40p per spin.

Like many of Novomatic’s fruit machines, there are few design flourishes on show in Grand Jester which is functional at best. The reels are plain black and include cherries, oranges, lemons, plums, bells, melons, grapes and double and treble bars. The best of the standard symbols is the lucky 7. land 3, 4 or 5 of these in combination for an award of 4, 10 or 50 times your total bet.

At the centre of the action is the Grand Jester himself who is the game’s wild – he substitutes for everything with the exception of the scatter and pays 0.5, 5, 20 or 200 times your stake if you land 2, 3, 4 or 5 on the same payline.

The main feature on offer here is the Bonus feature which is triggered by landing 3, 4 or 5 diamond scatters on the same spin. You’ll then pocket 3, 30 or 300 times your total stake and receive 12 free spins.

Keep a special eye out for the Jester during the free spins – whenever it lands it expands to turn the whole of the reel wild. That stacked wild will remain locked in place for the free spin that follows too. Land 3 diamond scatters for a re-trigger and another dozen free spins.

Those stacked wilds are the key to unlocking the progressive jackpot too – fill all 5 reels with a stacked Jester wild on the same free spins and you’ll trigger the big one.

Grand Jester is typical Novomatic fare. The visuals look pretty dated compared to the slick video slots we see from many developers these days. The gameplay still hits the spot though, offering plenty of action and high variance thrills.