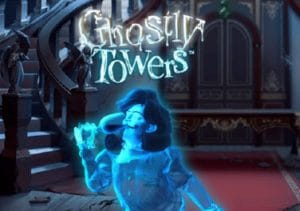 WHERE TO PLAY Ghostly Towers SLOT

Say ‘bonjour’ to a spooky French apparition called Pierre in the Ghostly Towers slot, a 5 reel, 20 payline game from Novomatic. As you’ll discover in our Ghostly Towers review, there are plenty of strange goings on in this creepy gothic mansion. On any spin, Pierre can add plenty of extra wilds, provide a big multiplier boost or cause a symbol shuffle which creates a new winning combination. There’s also a free spins round where collecting gems brings the 3 modifiers into play. Are you brave enough to enter Ghostly Towers? Let’s see what else is lurking behind closed doors.

There’s a very decent range of extras on offer in Ghostly Towers and the cheeky phantom Pierre is at the centre of most of them. You’ll find a trio of base game modifiers as well as a free spins round where the modifiers can also come into play.

On any spin, Pierre can appear and magically add extra wilds into play. These substitute for everything apart from the free spins scatter symbol. A new payout calculation follows with the wilds in position. You could land up to 15 wilds here which can deliver come outlandish results. This is known as the Wickedly Weird Wilds feature.

Pierre can appear at random brandishing a book. He’ll turn the pages to reveal a multiplier. This multiplier is boosted to any wins you have landed on that spin. Multipliers can get as high as 20x with this modifier. Known as the Mental Multiplier Mania feature, you can win up to 2,400 x your bet with the 20x multiplier.

Trigger the Free Spins feature by landing 3 or more scatter symbols anywhere on the reels on the same spin. You can trigger the 3 modifiers during the free spins by collecting gemstones. Each stone fills a spot on the modifier meter. Once all 5 positions on a meter are full, the modifier becomes active.

Ghostly Towers uses a simple 5 reel, 3 row game engine that offers 20 paylines. All combinations are formed left to right beginning on reel – except scatters. Stakes range from between 40p and £100 per spin.

Just click on the autoplay tab next to the spin button if you want to spin automatically. Like with all Novomatic slots,  you will be prompted to set a number of spins (rounds), a loss limit and whether you want to stop the autoplay once a single win exceeds or is equal to a chosen limit.

The RTP of 95.15% is a little on the skinny side. Not dreadful but we’ve seen better. The Ghostly Towers volatility isn’t as high as some slots from Novomatic. It’s in the medium range and offers balanced range of payouts. The maximum win per spin is a mere 120 x your total bet. The multiplier up to 20x can boost the max win to 2,400 x your bet, however.

There’s a nice cartoon horror feel to the Ghostly Towers slot. The reels are set against a backdrop of a room in the mansion. You’ll see a staircase cobwebs and some pretty creepy statues. On the reels you’ll see A to 10 symbols alongside a full moon scene. This doubles your bet if you land 5 on a payline.

Pierre, who looks like a French nobleman or an unnamed member of The Three Musketeers is the wild. He replaces everything apart from the free spins scatter and pays 3x your total bet if you land 5 in combination.

The imagery is fine as it goes. The symbols are nicely drawn and it fits the theme rather nicely. The reels are set at the bottom of the screen with a room on top. It feels like you’re playing on a mobile even if you’re using a big screen desktop device. That doesn’t make it the easiest to follow.

I have no complaints about the music though which is excellent. It certainly gives the game a chilly atmosphere but it’s cartoon horror rather than anything genuinely scary.

Novomatic’s standard game interface is available here. You can set stake levels and autoplay without having to leave the game page. Click on the menu button and you can access the paytable and other setting.

The visuals in Ghostly Towers feel rather cluttered on a laptop or desktop. It does look better on a mobile though as the visuals extend nicely for play on a handheld device.

Ghostly Towers Thoughts/Opinion – some top features in this ghoulish game

Ghostly Towers is a really good slot. The trio of modifier extras can deliver plenty of action in the base game and the free spins round can be well worth hitting when the gemstones work their magic. It’s all about the Mental Multiplier Mania feature which can give you 2,400 x bet payouts on each spin or free spin.

The cramped design left is a little disappointing though. Which is a shame as there’s plenty to like about Ghostly Towers. If you like the ghoulish theme, Ghostly Towers is a good option as it’s entertaining, has plenty of bonus features and can dish out big wins from the multipliers. If horror is your thing, Blood Suckers II by NetEnt would be my choice.

❓  What is the Ghostly Towers RTP?

The RTP of Ghostly Towers is 95.15% which is a little on the low side. Medium variance, there are plenty of bonus features to keep you entertained.

🥇 What is the Ghostly Towers max win?

The most you can win per spin/free spin from the Ghostly Towers slot is 2,400 x your total bet – to achieve this, you will need the 20x multiplier from the Mental Multiplier Mania feature.

🎰 Is there a Ghostly Towers mobile version?

Yes – you can play Ghostly Towers on mobile, desktop and tablet devices. It looks better on smartphone devices due to the way the reels are laid out.

⚡ What are the Ghostly Towers bonus features?

Ghostly Towers comes with 3 base game modifiers. These award multipliers of up to 20x, up to 15 extra wilds or a symbol shuffle that can turn a loser into a winner. There’s also a Free Spins feature where collecting gemstones triggers a modifier and effectively adds extra free spins to your total.