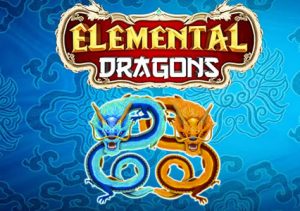 WHERE TO PLAY Elemental Dragons SLOT

Fire, earth and water can combine to exciting effect in Elemental Dragons, a 5 reel, 20 payline video slot from Novomatic. There are plenty of extras on offer in this trip east. The Power Reels add 1 wild to each reel, while the Dragon Wilds each award a different modifier extra. There’s also a free spins round with sticky wilds. Play this high variance game on your PC, tablet or mobile from between 20p and £100 per spin.

Novomatic’s recent design renaissance continues with Elemental Dragons which looks and sounds rather good. With red lanterns above and fire and ice dragons to the side, the reels feature Chinese-style A to 10 symbols plus high value objects that relate to the Asian theme.

They include flowers, gongs and lanterns which award up 10 times your total bet per payline and koi carp and firecrackers which award up to 50 times your bet. The fire and ice dragon heads are the most lucrative symbols. Land 2, 3, 4 or 5 of them in combination and you’ll pocket an award of 0.5, 5, 25 or 100 times your bet. Those same amounts are on offer from the wild. Unusually for a Novomatic game, there’s a whole raft of features to get stuck into in Elemental Dragons.

Dragon Wilds feature – these can strike at random on any spin on the middle 3 reels and award 1 of the following modifiers:

Sticky Wild Dragon Free Spins feature – this round is triggered by landing 3 or more scatters on the same spin. Your reward is 10 free spins. A mysterious glow will appear around reel 1 at the start of the free spins. Land a dragon head symbol on reel 1 and that turns into a wild and an extra free spin is awarded. Fill all 3 positions on reel 1 with a wild and the mystery glow shifts to reel 2 and the process is repeated.

Any dragon heads that hit on reel 2 then turn wild. Turn the whole of reel 2 wild and you’ll receive 4 extra free spins and the glow shifts to reel 3. Turn that reel totally wild and 2 more free spins are awarded. Altogether, there’s 31 free spins up for grabs.

Power Reels Bonus feature – the mystery glow can appear in the base game too. If it surrounds all 5 reels, you’ll activate the Power Reels. A dragon slides down each reel, dropping 1 wild onto each of them. A new payout calculation then follows with the extra wilds in place.

Novomatic video slots are often simple affairs. There’s much more going on here than we expected and that’s all to the good. What we were hoping for (and we weren’t disappointed) was a high variance game. This is a volatile game so there’s the potential for some big bankroll swings – up to 4,000 times your bet can be won on each free spin.

There’s plenty to like about Elemental Dragons. With hundreds of similarly themed video slots already available, it takes something unusual to stand out. In Elemental Dragons, Novomatic has managed to do just that. I also think you should try Novomatic’s Tidal Riches which is unusually good.