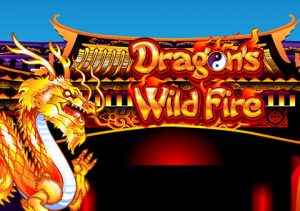 Dragon’s Wild Fire is an extremely volatile 5 reel, 20 payline video slot from Novomatic. Available on desktop, tablet and mobile devices, this Chinese-themed game comes with re-spins with stacked sticky symbols as well as a free spins feature with stepping wilds. Stakes range from between 20p and £40 per spin.

We sometimes don’t have the kindest words for the designers at Novomatic – they deserve a pat on the back here though as Dragon’s Wild Fire looks and sounds excellent. Set against a temple backdrop, the reels include Chinese style A to 10 playing card values alongside an assortment of letters, coins, firebirds and dragons. The flaming wild replaces all other symbols apart from the scatter. 5 on a payline pays 20 times your total stake.

When the dragon symbol lands fully stacked, you’ll trigger the Flaming Re-Spin Bonus feature – the dragon symbols, as well as any wilds on show, are locked into position and you’ll be awarded a re-spin. If any more dragons or wilds land, they too will be frozen in place and another re-spin follows. These continue until there’s a spin when no new dragons or wilds are added.

The black and white yin and yang style symbol is the scatter – when this lands on reels 1, 3 and 5 on the same spin, you’ll trigger the Free Spins Bonus feature and be awarded 7 free spins. These come with stepping wilds – prior to each free spin, choose left, right, up or down.

Any wilds on show on the spin that follows will step along to the edge of the reels in the direction that you originally chose. They’ll also turn the symbols lying in their way into wilds too. You can re-trigger more free spins here, if you land 3 yin and yang symbols on the same free spin – giving you up to 14.

As you’d expect from a video slot called Dragon’s Wild Fire, this is a volatile beast – expect lengthy lean spells punctuated by the occasional big hitting win. Patience and deep pockets are pre-requisites here. If you have both of those, there’s much to like here. The visuals are good and the Chinese soundtrack a nice match.

The features are simple but feisty – get lucky here and the Dragon’s Wild Fire can be very hot indeed. If you like dragons, Yggdrasil Gaming’s Double Dragons is a must!