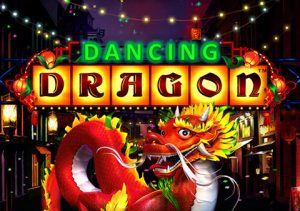 WHERE TO PLAY Dancing Dragon SLOT

Celebrate the Chinese New Year with Novomatic and its Dancing Dragon video slot. It’s a volatile 5 reel, 50 payline games that comes with a free spins round where your winning chances are boosted with the addition of up to 75 extra wilds. Playable on all devices, stakes range from between 50p and £20 per spin.

The visuals in Dancing Dragon are a step up from the stodgy imagery we often find in some Novomatic games – a bustling Chinatown scene forms the background to the reels. Joining the A to 9 playing cards (which are decorated with lanterns and firecrackers) are coins, lanterns, dragons, a masked figure and a woman holding a fan. These 2 human characters offer awards of up to 18 times your stake per payline.

More lucrative still is the dragon, lucky red obviously, which is the game’s wild – as well as replacing all symbols bar the scatter, it offers payouts of up to 20 times your stake per payline. Like most titles from Novomatic, Dancing Dragon comes with a single feature round. As usual, it’s a Free Games feature with a twist.

Land 3, 4 or 5 of the money wallet and you’ll pocket an award of 100, 250 or 500 coins as well as being awarded 10 free spins. The wrinkle here is the addition of extra wilds – the precise number of wilds is decided in the base game. Every time a wild lands, it’s collected in a meter above the reels.

All those collected wilds flood the reels once the feature is triggered – you can add up to 15 extra wilds on each reel. Trigger the maximum and you’ll have an extra 75 wilds spinning around the reels on each free spin. Land 3 or more scatters and you’ll get 10 more free spins taking your total to 20.

Like many video slots in the Novomatic catalogue, Dancing Dragon is a pretty volatile affair. The variance isn’t as sky high as some games but it’s still a pretty feisty game. The gameplay is simple as we’ve come to expect from this developer – the extra twist in the feature round is a good one though.

Dancing Dragon offers all the usual goodies we’ve come to expect from Novomatic – simple design and gameplay, a free spins round with a twist and volatile action. If that floats your boat, you’ll enjoy this Chinese New Year celebration. You could also play Chinese New Year by Play ‘N Go which has a similar theme.