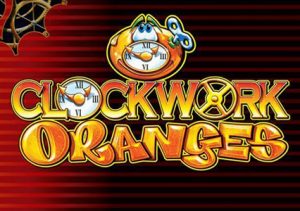 WHERE TO PLAY Clockwork Oranges SLOT

Its name may be almost identical to one of the most notorious films in movie history but Clockwork Oranges is about as far removed from Stanley Kubrick’s violent epic as it’s possible to get. Powered by Novomatic, this 5 reel, 20 payline video slot is a decidedly light-hearted, low variance affair with any thrills coming from the bonus wheel feature that awards prizes of up to 500x. Play from between 20p and £50 per spin.

Clockwork Oranges is a typically simple Novomatic game as far as look and sound are concerned. Joining the brightly coloured A to 9 playing cards are the Clockwork Oranges logo which awards payouts of up to 500 times your line bet.

By far the most lucrative symbol is the wild – landing 2, 3, 4 or 5 of these on 1 of the game’s 20 paylines will get you a payout of 4, 100, 1,000 or 10,000 coins. The other symbol to look out for is the Clockwork Orange which is the scatter. It doesn’t offer any specific payouts but will trigger the Clockwork Oranges feature when it lands on reels 1, 3 and 5 on the same spin.

The feature is a little unusual to say the least – on a new screen, you’ll be presented with a clock featuring the numbers 1, 2 and 3. Depending on where the clock’s hands finish will decide the number of hands you’ll have in play during the feature proper. It will also impact on the potential prizes you can win.

You’ll then be taken to another screen where the bonus plays out. You’ll be shown a clock face with a difference – instead of numbers, it features fruit. The clock hands will spin. As they land, they’ll add a piece of fruit to the meter. 3 of the same fruit 3 times triggers a cash prize.

What you’re hoping for here is to collect all 3 oranges which activates the Super feature. Instead of the hands spinning, they will sweep in a clockwise direction, collecting all the fruit in their way for a potentially very tasty prize.

Clockwork Oranges is a simple game and the variance here is low. If you’re chasing mega jackpots, then this probably won’t be one for you. A classic it ain’t but for some basic, light-hearted, cartoon action, Clockwork Oranges delivers. If you like higher variance games, Novomatic, thankfully, offers plenty with Red Lady and Lord of the Ocean recommended.