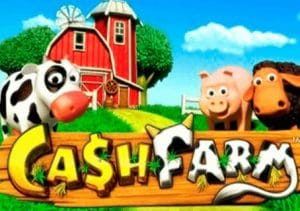 WHERE TO PLAY Cash Farm SLOT

Trying to harvest a bumper crop of coins is the goal in Cash Farm, a classic farmyard themed video slot from Novomatic. Played using a 5 reel, 25 payline game engine, this volatile game comes with cascading reels and a classic pick me round. Get mucky from between 25p and £50 per spin.

Unusually for a Novomatic game, Cash Farm is played using a Reel Refill feature – after a winning combination is created, the payout is made, the successful symbols are removed from the reels and new symbols drop in and replace them. These Refills continue as long as a new winner is landed.

The design is a bit glossier than you might expect from a Novomatic-powered video slot. Set against a brown fence backdrop, the reels include lower value A to 9 playing cards. They’re joined by cartoon hens and rabbits which pay up to 12 times your bet per payline followed by pigs and black sheep which award up to 20 times your total bet.

The most rewarding standard symbol is the cow which pays 3, 12 or 40 times your total bet if you land 3, 4 or 5 on the same payline. Helping you to grow winning combinations is the barn which is the game’s wild. It replaces all other symbols with the exception of the scatter and pays 4, 30 or 200 times your total bet for a 3, 4 or 5-symbol winner.

Cash Farm comes with a Pick & Win feature which is triggered by landing 3 or more of the scatter (the blue tractor) on the same spin – 3, 4 or 5 will give you a payout of 5, 20 or 200 times your bet. You’ll then be taken to a new screen and offered a selection of bales of hay.

Starting from the bottom row, make your pick. On offer are cash prizes and multipliers. If you find an arrow, you’ll be able to pick from the row above where bigger rewards are on offer. Keep on picking until you land the $ which brings the round to a close.

Cash Farm is something of a departure from Novomatic. The shiny 3D visuals are a step up from what we usually find from the Austrian developer. The range of extras isn’t wide but the Reel Refills keep the base game ticking over and the picks round offers some decent potential. The variance here is in the medium to high range.

If you fancy a trip to the country without the mud, wellies and nasty smells then Cash Farm is a game to consider. Alternatively, NetEnt’s Tornado Farm Escape is recommended.