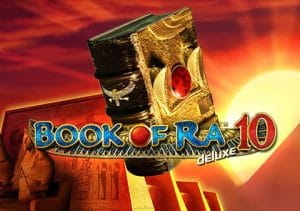 WHERE TO PLAY Book of Ra Deluxe 10 SLOT

Novomatic is inviting players on yet another Egyptian treasure hunt in Book of Ra Deluxe 10. The latest instalment in this popular series is a little different in that the action takes place on 2 sets of reels which combine to offer 100 paylines. Highlights include stacked wilds that can duplicate from the small to the big set of reels. There’s also a bonus round that awards up to 10 free spins complete with special expanding symbols that transfer and pay scatter style. Stakes in this low to medium variance slot range from between 20p and £100 per spin.

The first thing you’ll notice about Book of Ra Deluxe 10 is that it’s played using 2 sets of reels. Joining the 5 reel, 4 row, 25 payline machine is a 5 reel, 12 row set which offers a further 75 paylines. The 2 machines spin independently but what happens on 1 can have an impact on the other. More on that below.

As far as design goes, we’re in standard Novomatic territory. On the reels are lower value playing card symbols plus a collection of Egyptian hieroglyphs and the treasure hunter. He is the best standard symbol, offering awards of up to 5 times your bet per payline. The adventurer (and the mummy) spin in stacked formation on the 12 row machine.

Land 3, 4 or 5 of the Book of Ra scatter on the same spin and you’ll trigger the Free Spins feature. On offer here are 8, 12 or 20 free spins. 1 symbol is randomly selected before the bonus round begins. This symbol will be the special expanding symbol.

When this appears on the small set, it expands to full the whole of the reel. The stacked symbol then duplicates onto the larger set of reels. The expanding symbol doesn’t need to be on adjacent reels to create a winning combination either.

It’s not overloaded with extras or massively original features. It’s not especially volatile either. Book of Ra Deluxe 10 should still find an audience though. Medium variance, you can win up to 500 x bet on each spin or free spin – compared to 5,000 x bet in other Book of Ra slots.

If you’ve enjoyed the other Book of Ra slots, like the legendary Book of Ra Deluxe, stick to it – this 100 payline version doesn’t match up to the high standards set by Novomatic.