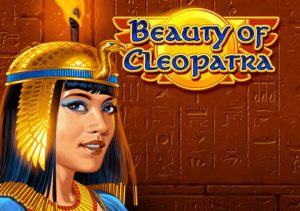 WHERE TO PLAY Beauty of Cleopatra SLOT

Try and bag some of the Egyptian queen’s riches in Beauty of Cleopatra, a volatile ancient-themed video slot from Novomatic. Played using a 5 reel, 10 payline game engine, look out for a bonus round that awards between free spins with all payouts boosted by a 5x multiplier. There’s also a big progressive jackpot prize on offer if you land 5 wilds on a payline. Play on your computer, tablet or mobile device from between 10p and £50 per spin.

Beauty of Cleopatra is a very simple and straightforward game. That’s true of both the design and the gameplay. The setting is a chamber in Cleopatra’s royal palace. Flanked by flaming torches and guards you’ll see A to 9 symbols spinning around the reels alongside a ring, a green gemstone and a galley. The most rewarding standard symbols are the Pharaoh and his bearded adviser, both of which pay 0.2, 2, 8 or 40 times your total bet if you land 2, 3, 4 or 5 combination.

The best potential rewards come from Cleopatra who is the game’s wild. She offers awards of 1, 5 or 40 times your bet if you land 2, 3 or 4 across a payline. Land a full 5 in a row combo and you’ll trigger the progressive jackpot prize and a bumper payout.

The coins can quickly build in this round courtesy of the 5x multiplier which is in play throughout. That’s certainly the case if you get a re-trigger and another round of free spins – you can retrigger infinitely.

Beauty of Cleopatra feels like an old school Novomatic blast. The visuals and soundtrack are simply done and you’ll hear the developer’s reassuring thud every time the symbols land. The gameplay is similarly basic but none the worth for that. The free spins round can be well worth landing thanks to the big multiplier boost that accompanies it – it can lead to wins of 2,000 times your bet on each free spin. This is a volatile game though so expect some chunky swings.

If you want some straightforward, volatile Egyptian fare, then you’ll want to pay homage to the Beauty of Cleopatra. I would also suggest you try Microgaming’s Lara Croft: Temples and Tombs which has a similar theme and a progressive jackpot.