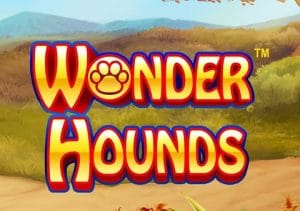 WHERE TO PLAY Wonder Hounds SLOT

Join a trio of pooches celebrating the Chinese Year of the Dog in Wonder Hounds. Created by NextGen Gaming, this 5 reel, 25 payline video slot comes with a feature round that awards 8, 12 or 15 free spins complete with up to 15 sticky wilds. Play this volatile, canine-themed game on your desktop, tablet or mobile device from between 25p and £250 per spin.

NextGen Gaming has kept things relatively simple as far as design goes as the action takes place against a forest backdrop. You’ll see A to 10 playing cards, complete with paw prints spinning around the reels. They’re joined by a trio of hounds.

There’s a British dog, dressed like Sherlock Holmes, called Winchester who awards up 150 coins per payline. He’s joined by a Chinese hound called Jinse (Golden in English) who pays up to 300 coins. The best of the trio is the American dog called Ace. Modelled on a WW2 pilot, he awards 60, 150 or 350 coins if you land 3, 4 or 5 on a line.

At the end of any spin, 1 of the 3 dogs can magically turn into a wild. A new payout consideration is made with the extra wilds in place. These come in addition to the standard wild which performs all the usual substitution functions as well as offering awards of up to 400 coins per payline.

The only feature on offer in Wonder Hounds is the Free Games feature – it’s triggered in the usual manner by landing 3, 4 or 5 scatters on the same spin. You’ll then receive a payout equal to 4, 15 or 100 times your stakes as well as 8, 12 or 15 free spins.

Before those free spins play out, between 1 and 15 wilds will be added to the reels. These will remain locked in place throughout the round, as will any other wilds that hit during the feature. The Wonderhounds wild transformations can hit during the free spins just like the base game. The only negative to report is that the free spins cannot be re-triggered.

Cute looking puppies would suggest a gentle, low variance game – Wonder Hounds is anything but that. This is a volatile game and you can expect some potentially big swings. You’ll endure plenty of spells which will send you barking mad. Get a good number of sticky wilds in the free spins and a kennel full of coins could be yours – there’s 6,000 times your bet to be won on every spin!

Wonder Hounds is a relatively simple game and the Chinese part of the theme is pretty minimal. If you’re a dog lover, then it’s well worth going ‘walkees’ with Wonder Hounds. NetEnt’s Diamond Dogs is also an option if you like pooches.