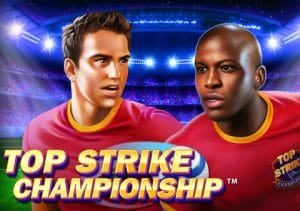 Go for goal in Top Strike Championship, a football-themed video slot from Side City Studios and NextGen Gaming. Played using a 5 reel, 20 payline game engine, the highlight of this match is the Free Games feature where you can win up to 20 free spins. From there you can trigger a pick me round where even more instant win cash prizes are on offer. Play on all devices from between 20p and £50 per spin.

The main bonus round, the Free Games feature, is triggered by landing 3, 4 or 5 of the trophy scatter. Your reward is 10, 15 or 20 free spins. New symbols are added here and the paytable is slightly different from the base game. There are other potential goodies on offer from within the free spins round too.

Hope to see a golden ticket land on reel 5 as this triggers the Treble Bet Bonus feature. You’ll be shown 3 tournament matches. Pick which country you think will win the match – a cash prize is awarded for each successful pick. If you correctly guess the result of all 3 matches, you’ll progress to the Knockout Stage Bonus Game feature where even more pick me prizes can be won.

The goal here is to pick the winner of each knockout game. If you pick the winner, you’ll go through to the next round. Cash prizes are awarded after each round. If you get a wrong result in the Treble Bet Bonus or Knockout Stage Bonus Game features, you’ll go back and play out any remaining free spins you have left. You can land golden tickets and trigger the Treble Bet Bonus multiple times in any set of free spins.

Top Strike Championship is a pretty simple game. The design is solid enough and the whistle blasts and roars from the crowd deliver plenty of atmosphere. The features are pretty basic. The 2 pick me features can deliver some decent results if you manage to get on a winning run.

It’s not quite the classic football-themed video slot we’re waiting for but Top Strike Championship is a perfectly solid performer without being a world beater. If you like your footie, NetEnt’s Football: Champions Cup is a decent game to play.