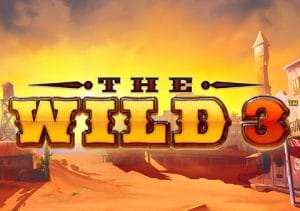 WHERE TO PLAY The Wild 3 SLOT

Join the great gold rush in The Wild 3, a super high variance 5 reel, 10 payline video slot from NextGen Gaming. Superbly designed, this Wild West adventure is also packed full of features including respins, free spins, wild extras, multipliers and a pick me bonus. Play on your PC, tablet or mobile from between 10p and £50 per spin.

You won’t find many better looking and sounding video slots than The Wild 3. A classic old west town forms the backdrop to the action. Joining the 3 lower value cactus symbols are TNT, bags of money, gold bars, safes and the town bank. Top of the payers is a character called Voltimer Vulture which pays 2, 5 or 25 times your bet for a 3, 4 or 5 symbol winner.

Key to the best action in The Wild 3 are the Racoon, Coyote and Bull, all of which are wild. They can deliver some very tasty extras when they land on the middle reel. The Racoon can land on reel 3 at standard stakes. You’ll have to activate SuperBet Mode to bring the other 2 into play. Playing at 15 or 20 coins per spin adds the Coyote and the Bull:

The Wild extras aren’t the only goodies on offer here either. You have the Free Games feature which is triggered if you land the Bonus symbol on reels 2 and 4 and a Wild on reel 3 on the same spin. You’ll then receive 5 free spins with sticky wilds (apart from Racoon or Coyote wilds that land on reel 3). Every Bonus symbol that lands during this round adds another free spin to your tally. The same goes for any sticky wilds that hit. The wild features can apply meaning you could get random wild symbols, cactus wilds and wild multipliers up to 10x.

When you begin playing, you’ll be set a number of missions. Once you’ve completed your 3 set missions, you’ll go on to play the Rob the Rich feature. This is a pick me round where you’ll be offered a selection of 15 money bags. Behind each them is a cash prize, a mystery symbol (which can pay between 5 and 100 times your bet) or +2 picks. You’ll have 3 picks to begin with. Keep choosing until you run out.

There’s plenty to enjoy in The Wild 3. The 3D visuals are as good as you’ll find anywhere and there’s a classic wild west feel to the orchestral soundtrack. The gameplay matches the classy design too, delivering plenty of variety and wide selection of extras.

If you like volatile action then The Wild 3 should certainly appeal. The variance here is extremely high. Expect spells as dry as the desert. Do well with the 10x wild multipliers in the Free Games feature and you could break the bank – to the tune of 25,020 times your bet on each free spin!

With its good looks, impressive feature and sky-high variance, The Wild 3 is an entertaining all-round performer. Whether or not you like the Wild West theme, it’s well worth taking aim here. If you like the theme, NetEnt’s Dead or Alive and Quickspin’s Sticky Bandits are worth heading West for.