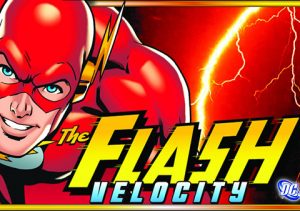 WHERE TO PLAY The Flash SLOT

The world’s swiftest superhero gets the video slots treatment in The Flash, a 5 reel, 50 payline game from NextGen Gaming. Based on the character created by DC Comics, it comes with wild multipliers that can boost wins by 10x, a bonus feature that awards free spins complete with stacked and random wilds and a mirror feature that replays your previous 4 spins. Play from between 50p and £120 per spin.

Your first decision when firing up The Flash will be whether to play with the Bonus Bet active – if you can afford it, we recommend that you pay the extra 10 coins per spin as it opens up some tidy extras. Every time the wild hits, your payline will be boosted by a multiplier of up to 5x in the base game or 10x in the free spins round.

The Rogues feature can only be triggered if Big Bet mode is activated too. To trigger those free spins, you’ll need to land 3 or bonus symbols on the same spin. You’ll then be awarded 12 free spins with a trio of modifier extras:

Captain Cold – when The Flash hits, Captain Cold will freeze that reel. The wild will expand to fill the whole reel and will remain frozen in place for the respin that follows.

Gorilla Grodd – the mighty ape adds a wild to a random position on the reels on each free spin.

Mirror Master – following any free spin, the time travelling Mirror Master can turn back the clock and replay the last 4 free spins.

The Flash wild multipliers are in play in all 3 free spin rounds – whenever it lands, the payout will be boosted by 2x, 3x, 4x, 5x or even 10x multiplier!

Rounding out the extras is the Speedster feature – this can hit on any spin in the base game only and randomly transforms symbols into wilds.

The visuals in The Flash are very nicely, paying homage to the superhero’s comic book roots. Set against a cartoon style cityscape backdrop, the reels include A to J playing cards a watch, a logo and the Flash’s fast feet. They’re joined by the Mirror Master, Gorilla Grodd and Captain Cold.

As we’ve mentioned already, The Flash himself is the wild – 5 wilds on a payline offers a mighty haul of 10,000 coins. The Bonus and Scatter symbols both pay up to 5,000 coins.

The Flash may not be as popular as his DC colleagues Batman and Superman but this game holds up against its more celebrated stablemates. The design is very classy and there’s a decent range of features to get stuck into.

There’s plenty to like in this medium variance slot, especially if you play with the extra bet active. Combining action, enjoyment and some decent winning potential, The Flash is a fast-paced and entertaining game. NextGen Gaming also offer you Justice League where all the DC Comics heroes feature.