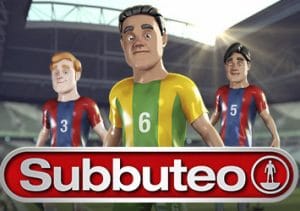 WHERE TO PLAY Subbuteo SLOT

First it was Top Trumps, now it’s Subbuteo that’s been given the video slots treatment, this time from betdigital and NextGen Gaming. Based on the classic flicking football game, it’s a 5 reel, 20 payline video slot that comes with a bonus round that awards up to 24 free spins with plenty of modifier extras. Look out too for the base game modifiers that can help trigger the feature or award respins or instant bonus prizes. Play on all devices from between 20p and £200 per spin.

A Subbuteo stadium, complete with frozen crowd is the setting here. On the reels you’ll see lower value A to 10 playing cards plus whistles, boots, trophies and players. The most lucrative symbol is the Super Sub who offers awards of up to 250 times your bet per payline in the bonus round. There’s also a wild that pays 100 times your bet if you land 5 in a row.

Below the main reel set you’ll see silhouettes of a team of 11 Subbuteo footballers. Look out for symbols that feature a club badge (which you can create before you start spinning). Every time 1 of these appears, 1 of the footballers will become active.

Once all 11 are active, you’ll trigger the Subbuteo Free Spins feature. Alternatively, you can pay to trigger it once 7 players are active. On offer are 18 free spins – each 1 is equal to 5 minutes on the clock which add up to the 90 minutes of a football match. There are plenty of extras on offer once this feature has begun.

The base game also comes with a range of extras that can help trigger the Subbuteo Free Spins feature or award prizes in their own right. These hit at random:

With all those extras, it takes a little getting used to Subbuteo. Once you have, it’s all rather straightforward. We found the free spins quite tricky to land but the extras that come with it make it worth the wait. The base game extras aren’t bad either. A New Contract brought with it a payout of 100 times our stake. Not bad for an instant bonus.

We were big fans of the table version of Subbuteo. This video slot is a decent enough adaptation. It’s not quite the world beater we were hoping for but still delivers enough entertainment to make it worth a spin – to the tune of 1,250 times your bet on every free spin. If you’re into your footie, Top Trumps Football Stars: Sporting Legends by Playtech is recommended.