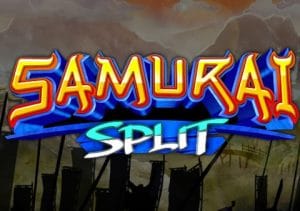 WHERE TO PLAY Samurai Split SLOT

Go into battle with a mighty Japanese warrior in Samurai Split, a superbly designed video slot from NextGen Gaming. Played using a 5 reel, 25 payline game engine, this Asian adventure comes with split symbols that can boost payouts by up to 32x. Also on offer is a Free Games feature with up to 480 free spins with all lower value symbols removed. Play on all devices from between 40p and £20 per spin.

The imagery in Samurai split has the look of a high-end comic book. With mountains and pagodas in the background, the reels feature Asian-style playing cards as well as higher value bottles, swords, horseback warriors and temples. Most lucrative symbol is the Samurai. Land 5 of him on a line and you’ll pocket 250 coins. More rewarding still is the wild – this can land on all 5 reels and offers payouts of up to 500 coins per payline. As usual, it substitutes for everything bar the scatter.

Watch out for the animated Samurai who can spring into life and jump onto the reels at random on any spin – this is the Split Symbol Bonus feature. Sword in hand, he can chop a random assortment of symbols – each chop boosts a multiplier which starts at 2x but can send payouts soaring by up to 32x.

The Warrior Spin feature can also hit at random – once triggered, all of the lower value playing cards are removed from the reels for the next spin.

The main extra on offer in Samurai Spirit is the Free Games feature which is triggered by landing 3, 4 or 5 of the red flag scatter. That will get you 5, 10 or 15 free spins. Hope to see the Samurai split those scatters though – if he does, the payout awarded is multiplied by 2, 4, 8, 16 or 32, depending on how many split scatters hit.

You can also retrigger the feature with a whopping 480 free spins on offer. All of those free spins, regardless of how many you win, are played out on a new set of reels that only features higher value symbols plus the wild and scatter.

There’s plenty to like about Samurai Split. It’s very easy on the eye and ear and offers some very solid potential. The split symbol extra is a nice innovation and works well. The free spins impresses too – mix all that together and Samurai Split becomes a very playable video slot. If you like samurais, Warlords: Crystals of Power by NetEnt is worth playing.