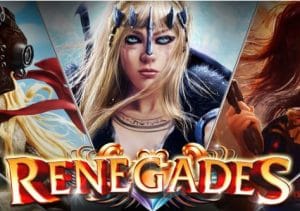 WHERE TO PLAY Renegades SLOT

Time travelling female adventurers are the stars of Renegades, a superbly designed 5 reel, 243 ways to win video slot from NextGen Gaming. It comes with special mega symbols that can fill up to 9 positions as well as a free spins round where 1 of the Renegades dominates the action. Stakes start at 40p, rising to £80 per spin.

NextGen Gaming are one of the better developers when it comes to design and they’ve thrown the kitchen sink at Renegades which looks and sounds superb. The reels are set against an icy, mountainous land and include 5 lower value gemstone symbols plus the 5 Renegades of the title.

They are Rafaela the pirate, Harriet the pilot, Valda the sword-wielding brigand and Ivy the explorer. Ice Queen Freya is the best of the standard symbols. They’re joined by a wild that replaces all other symbols bar the scatter. So far, so standard then.

All of the symbols bar the bonus can land up to 3 spaces high and 3 spaces wide. A full mega symbol stretches to some 9 positions and can deliver some potentially fantastic combinations. This is called the Renegades Mega Symbols feature.

These mega symbols can really come into their own during the Renegades Free Games feature which is triggered by landing 3 of the bonus symbol on the same spin – you will then receive 8 free spins. Before they start, 1 of the Renegades is chosen at random.

The other 4 Renegades are removed from the reels for the duration of the free spins. You’ll only see the gemstones, wild and scatter alongside the randomly chosen Renegade. Just like the base game, you can see mega symbols. In fact, you can expect to see more of them than in normal play with the other Renegades not appearing. Re-triggers are possible here too giving you up to 16 free spins.

We found the base game to be pretty frustrating, going through lengthy winless spells. We cashed in nicely when triggering the feature though, pocketing over 830 times our stake from our 8 free spins (and not even hitting a re-trigger). We found the variance to be quite high as it has potential payouts of up to 759 times your stake on each spin.

The design is very nicely done, complete with a sweeping orchestral backing track. No grumbles on that front.  Renegades is all about the feature – it’s not the easiest to land but can deliver some potentially spectacular action. Land a high value Renegade and a re-trigger and these historical adventurers can serve up some thrilling action. If you like high variance offerings, I also recommend you try NextGen Gaming’s Titan Storm.