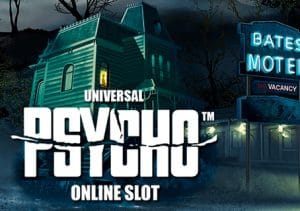 WHERE TO PLAY Psycho SLOT

Psycho has been created by NextGen Gaming and Universal Studios with 5 reels and 25 paylines. The slot game brings Alfred Hitchcock’s 1960 film to life – the film is regarded and one of the best movies of all times and is an American psychological thriller/horror classic. The film was portrayed violent and sexual behaviour that was unseen at the time so it was very controversial which sparked a lot of debate. Psycho has since earned cult status.

The game’s imagery closely depicts the film as its set in an isolated wooden house which is found on a hilltop overlooking the infamous Bates Motel. With the nervy and creep countryside setting, there’s a silhouetted figure in the window watch over the guests at her hotel with Norman being the front of house. This really brings the essence of the classic film to life – it also has a chilling soundtrack. Anyway, Psycho is playable from 25p to £50 a spin.

There are Psycho Wilds in the base game which can appear on any spin. If you get them and have a winning combination, the win will be subject to a multiplier ranging from 2x to 20x (2x, 3x, 4x, 5x, 10x and 20x). The multiplier is applied at random – just hope you get the 10x or 20x multipliers when you have a few Psycho Wilds!

The main attraction is the Free Game feature (free spins feature basically) which is playable when 3 or more Haunted House scatter symbols appear on the reels simultaneously. The number of scatters will reward you with up to 20 free spins as 3 gives you 10 free spins, 4 gives you 15 free spins and 5 gives you 20 free spins.

What makes this feature stand out is that more Psycho Wilds will appear than in the base game. On top of this, wins containing these wilds will be subject to a multiplier ranging up to 40x – yes, 40x! The multiplier values are 2x, 4x, 6x, 8x, 10x, 20x or 40x – basically doubled from the base game. Lastly, you can retrigger the feature if you get 3 or more scatters during the feature giving you a potential of 40 free spins in total.

When it comes to volatility, Psycho is medium to high variance which is perfectly suited to my needs – medium to high variance games have the right balance in my opinion as most wins will be of a decent size with the potential for that monster win available. Anyway, the maximum possible win in the base game is 750 times your stake but this doubles to 1,500 times your stake in the free spins feature. Only time will tell how popular Psycho will prove to be with slot players but I think it’s the best slot game NextGen Gaming have produced since 300 Shields and Medusa.

I really like the Psycho slot game as it’s a medium to high variance slot – NextGen Gaming released the branded Judge Dredd which was ok but this release is just superb. There are very big wins to be had in Psycho win a maximum win of over 750 times your stake in the base game and over 1,500 times your stake in the free spins feature – this puts Psycho on par , in terms of variance, with the cult 300 Shields (also by NextGen Gaming).