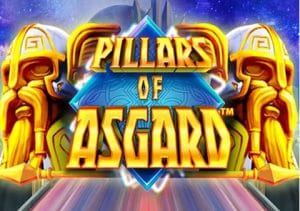 WHERE TO PLAY Pillars of Asgard SLOT

NextGen Gaming is the latest developer to aim at Norse-themed video slot immortality and they’ve come up with something epic in Pillars of Asgard. The base game action plays out on a 6 reel, 4,096 ways to win machine. Trigger the bonus and they can expand to offer up to 1 million ways to win! Look out too for wild multipliers of up to 10x as well as plenty of wild extras. Play this super volatile casino game from 25p to £50 per spin – on all devices of course.

This Norse epic comes with cracking sound and visuals. Given all the moving parts, you won’t find many better designed video slots than Pillars of Asgard. With the cloud-filled stairway to Valhalla in the background, the reels are flanked by the 2 Pillars of Asgard. Joining the Norse-style royals are more rewarding emblems and weapons. The soaring orchestral backing track gives the game an epic quality.

Most of the action takes place on a 6 reel, 4,096 ways to win game engine where winners are formed by landing matching symbols on adjacent reels – starting from reel 1.

Odin wild multipliers of up to 10x

Joining the standard symbols is Odin which is the wild symbol. This can appear anywhere and substitutes for everything bar the scatter. The wild also comes with multipliers attached. The likelihood of landing a big multiplier increases the more wilds are in the winning combination. With a single wild, you could get a boost of between 2x and 10x. With 6 wilds, the multiplier will be 8x or 10x. This is called the Wild Multiplier feature.

The gold crown is the scatter. Landing 3 or more of these on the same spin triggers the Free games feature. Your reward is 20 free spins on an expanded set of reels. The more scatters on the triggering spin, the more rows and potential ways to win become active. This is known as the DynaReels engine:

These reels can get even bigger during the free spins.

Up to 1 million ways to win

Land a scatter during the free spins and it will expand that reel by 1 row and increase the number of ways to win in the Reel Rise feature. That scatter also turns into a wild and remains wild for the rest of the free spins. A reel can reach 10 rows high.

Buy your way in

If you wish, you’ll have the option to buy your way into the Free Games feature. The Buy Pass feature will cost 80 times your total bet. You can also take part in a spin the Take a Chance feature to try and figure the feature. This costs between 10 and 70 times your bet depending on how much of the wheel results in a trigger and how much results in a loss.

Pillars of Asgard is the definition of a high risk, high reward video slot. The wild multipliers and the Free Games feature can deliver some cracking action – up to 25,00 times your bet on every spin or free spin! Expect plenty of lengthy down spells though when the Norse gods will seem anything but benevolent. The variance here is extremely high.