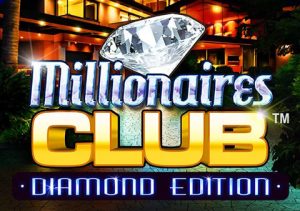 Enjoy a taste of the high life in Millionaires Club: Diamond Edition Jackpots, a 5 reel, 40 payline video slot from NextGen Gaming. Highlights of this game include the bonus round that awards up to 40 free spins with all payouts doubled as well as a spin the wheel bonus where bumper jackpot prizes are up for grabs. Play on all devices from between 40p and £100 per spin.

Considering the theme here is wealth and luxury, the visuals aren’t as blingy as you’d expect. The imagery is classy rather than flashy. Set against an apartment complex, the reels are made up of lower value playing cards as well as watches, sports cars, helicopters and yachts. The poolside scene is the best symbol, awarding 7.5 times your bet if you land 5 on the same payline.

Helping to create those winning combinations is the Millionaires Club logo which is the wild – it spins in stacked formation and substitutes for everything apart from the scatter (the golden envelope). Landing 5 wilds on a line will get you 20 times your bet.

Find 3, 4 or 5 scatters anywhere on the same spin and you’ll trigger The Club Free Games feature – as well as a payout of 5, 10 or 100 times your bet, you’ll also receive 10, 15 or 20 free spins. All winning spins receive a 2x multiplier boost during the free spins, doubling the payout. You can also win extra free spins taking your potential total to 40.

To the side of the reels you’ll notice a meter which rises every time a wild lands during the round. Collect 15 or more wilds and you’ll get to spin the Millionaires Wheels once all of your free spins have played out.

We normally find these luxury-themed games a bit over the top – you couldn’t accuse Millionaires Club: Diamond Edition Jackpots of that. With is high end design and features, this is a very playable overall package. We’ll even forgive them the missing apostrophe! I also recommend you try other games from NextGen Gaming’s Jackpots range with Medusa II Jackpots a good game to try.