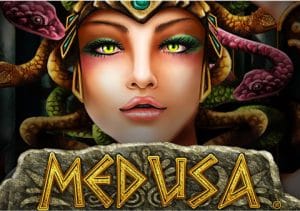 WHERE TO PLAY Medusa SLOT

Medusa is powered by NextGen Gaming is has a mythological theme as it’s based on the popular Medusa story. It has 5 reels and 25 paylines and can be played from 25p to £50 a spin. The question you need to ask yourself is do you dare enter Medusa’s lair for a terrifying ride to riches?

Released way back in 2009, Medusa has achieved cult status and for good reason – with ancient Greek temples in the backdrop, it has a spine-tingling soundtrack. Symbols on the reels include daggers, vases, sandals, snakes, Gorgon coins, warriors and earrings. The temple is the most rewarding symbol giving you 200 times your stake for 5 on a payline.

Medusa herself is the wild symbol and when you get 3, Medusa will turn reels 2, 3 or 4 into stone – 1 of the reels will crack and reveal an expanded wild that remains in place for 3 respins. These 3 respins come with a 3x multiplier too. This is known as the Turn to Stone Respins feature.

Then you have the Once Bitten Bonus feature which is triggered when 3 or more Medusa logos appear anywhere on the reels. You will receive 10 free spins with all prizes doubled (2x multiplier). You can also retrigger the feature giving you 10 more free spins.

Look out for the Solder symbol on the middle reel as he will reward you with up to 3 Super Spins every time he appears. Once the free spins are over, the Super Spins feature comes into play. More importantly, all wins come with a massive 5x multiplier meaning all wins will be multiplied by 5.

Finally, you have the Pegasus Bonus feature which is triggered when you get 3 Pegasus symbols anywhere on the reels. This is a classic ‘pick me’ feature where you pick a Pegasus to reveal a cash prize – you can win up to 50 times your bet here. Additionally, you can reveal ‘Pick Again’ or ‘Win All’ which will help you increase your cash prize total. What is even better about this feature is that you can trigger it during the free spins and Super Spins meaning that a respective 2x or 5x multiplier will be applied to your Pegasus Bonus winnings!

I find Medusa to be a medium to high variance video slot as wins are on the smaller side in the base game. I found the bigger wins to come from the Once Bitten Bonus feature due to the trebling multiplier. However, your biggest wins should come with the Super Spins feature where the 5x multiplier can reward you with payouts of 25,000 times your stake (a screen full of temples/wilds and the 5x multiplier).

Medusa may have been released in 2009 but it has paved the way for sequels like Medusa II, Medusa II Jackpots and Medusa MegaWays.