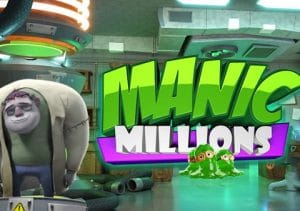 WHERE TO PLAY Manic Millions SLOT

Plants, potions and mad professors are the stars of Manic Millions, a science themed video slot from NextGen Gaming. Available on all devices, this 5 reel, 25 payline game features top notch sound and visuals and comes with added wilds and scatters and a free spins feature. Enter the lab from between 25p and £625 per spin.

The design team at NextGen Gaming deserve a pat on the pat for Manic Millions which looks and sounds terrific. A mad scientist’s laboratory forms the backdrop to the reels. Watching over proceedings are the bearded professor, Dr Cranium, and his Frankenstein-esque creation, Igor.

The scientific theme is maintained with the symbols which include 6 chemical flasks filled with brightly coloured potions. They’re joined by aliens, little green men, a Little Shop of Horrors style plant and poor old Igor – he is the most rewarding standard symbol, paying 500 coins if you manage to land 5 on a payline.

Better still is Dr Cranium who is the game’s wild – as well substituting for all other symbols apart from the scatter, he’ll also get you a payout of 10, 50, 200 or 1,000 coins if you land between 2 and 5 on a payline.

The lumbering Igor may look a bit of a simpleton but he can help your winning chances in both the base game and the bonus feature. The animated Igor can pull a lever on any spin in the main game and in the process, trigger the Igor Wild Bonus feature – this will add an extra wild to 1 or multiple reels. A new payout is then made with Igor’s added wilds safely in position.

Just like in the base game, Igor and his magical lever (ahem) can spice up the action. In this case, by adding up to 3 extra wilds to each reel on each free spin. He can also add extra scatters to the middle 3 reels, known as the Igor Scatter Bonus feature, which will boost your chances of re-triggering even more free spins (up to 20 in total).

Manic Millions has a zany feel – the madcap design is very well done, backed by a suitably anarchic backing track. Accompanying the action are clanking beakers and bubbling chemicals which improve the atmosphere still further. No complaints then on the design front.

There isn’t a massive range of extras on offer here but Igor and his extra wilds and scatters can certainly spice up the action. We hated science at school. Some time with this manic professor is far more entertaining. Get lucky with the added wilds and this lab offers a very enjoyable formula. I also recommend you check out some of NextGen Gaming’s other titles including Cash Stampede and the iconic 300 Shields.