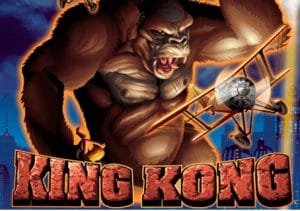 WHERE TO PLAY King Kong SLOT

Based on the 1930s film about the world’s most famous ape, King Kong is a 5 reel, 25 payline video slot powered by NextGen Gaming. Look out here for expanding wilds which can fill the middle reel as well as a bonus feature that awards up to 150 free spins with all payouts doubled! Play from between 25p and £50 per spin.

The imagery in King Kong has a comic book feel – set against a skyscraper filled backdrop, the reels include cinema tickets and handcuffs, skull and movie camera, crab and ship, biplane and dinosaur. They’re joined by the hero and heroine. Land 5 of the blonde-haired heroine and you’ll pocket a bumper haul of some 7,500 coins.

The mighty King Kong is the game’s wild – appearing on the middle 3 reels only, he replaces all other symbols bar the scatter. When the wild lands on reel 3, King Kong explodes into life and expands to fill the whole of the reel. He can also spread extra wilds to the adjoining reels to offer even more winning opportunities. This is known as the King Kong Goes Ape feature.

The chief attraction here is the King Kong Smash feature – to trigger it, you’ll need to land 3, 4 or 5 King Kong logo symbols from left to right on successive reels. This round recreates 1 of the movie’s most famous scenes and features King Kong atop a skyscraper being attacked by a range of biplanes.

Pick a plane and King Kong will try and smash it – if he does, you’ll be awarded some free spins. The more planes smashed, the more free spins you’ll receive. Keep on picking until King Kong has missed 3 planes. The prizes on offer are as follows:

During the feature, all payouts are boosted by a 2x multiplier and doubled. It’s possible to re-trigger another round of free spins during the feature too if the scatters fall nicely. The same number of free spins as the original haul is awarded if you find 3 scatters. Alternatively, you can trade in your free spins and opt for a mystery credit prize if you prefer – we’d steer clear of this option if you’ve managed to land at least 50 free spins.

As far as variance goes, King Kong is in the medium to high range. The stacked wilds certainly help things along in the base game but the best winning opportunities will come in the free spins. Land a big haul here and the 2x multiplier can quickly work some magic.

Featuring impressive imagery, fiery animations and a sweeping, Hollywood-style soundtrack, the design in King Kong is good. Throw in a couple of classy features and this modern take on an old favourite is well worth a closer look. I you like the theme, Playtech’s King Kong is recommended.