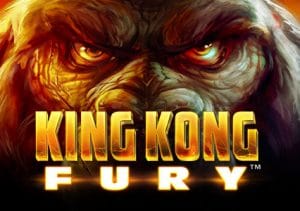 The mysterious Skull Island is the setting for King Kong Fury, a 5 reel, 50 payline video slot from NextGen Gaming. This prequel takes us to Kong’s home turf and comes with spins where up to 12 wilds are added, spins where multiple matching high value animals are in play and a free spins round complete with stacked wild re-spins. Stakes range from between 25p and £500 per spin.

The reels here are set against the wild terrain of Skull Island. Joining the usual A to 9 playing cards are an assortment of insects, snakes and dinosaurs. The best of these is the T-Rex which pays 10 times your bet if you land 5 on a payline.

Kong is the wild – the giant gorilla can land on reels 2, 3 and 4 only. He replaces all other symbols bar the scatter. That scatter is the kidnapped actress Ann Darrow. When this lands on reels 1 and 5 it triggers the King of Skull Island Free Games feature. Spin the skull reels to see how many free spins you’ve been awarded. Get lucky here and you could up with a mammoth 100 free spins. Re-triggers are possible too giving you unlimited free spins if you’re lucky

King Kong Fury also comes with a couple of other extras. These can strike on any spin in the base game or during the King of Skull Island Free Games feature. You have the Lightning Reel feature where up to 15 matching beast symbols are dropped onto the reels. The rest of the symbols spin as normal and a new payout is then made with the new combination in place.

Secondly you have the Kong’s Call feature – after a spin has been completed, you might hear the faint chant of ‘Kong’. If you do, extra wilds are dropped onto the reels. The more shouts of ‘Kong’ the more wilds appear. You could end up with 12 extra wilds in play. A new payout consideration is then made with all the wilds in position.

NextGen Gaming has obviously put a lot of effort into the design of King Kong Fury which looks terrific. There’s a camouflage feel to the reels though so you’ll need to keep your eyes peeled. There’s plenty to like about the gameplay here.

Both the modifiers land at regular intervals to spice up the base game. The King of Skull Island Free Games feature offers plenty of potential too, especially if you manage to get some stacked wild re-spins. The overall variance is in the medium to high range with top payouts of 12,500 times your bet on each base game spin, free spin or re-spin.

This prequel to NextGen Gaming’s first King Kong video slot works well. Combining classy design with some potentially explosive extras, this trip to Skull Island is certainly one worth making. I also recommend you try NetEnt’s Planet of the Apes which is also a blockbuster movie tie-in.