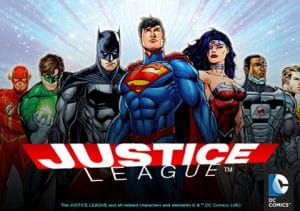 WHERE TO PLAY Justice League SLOT

Join Batman, Superman, Wonder Woman and the rest of the superhero team in Justice League, a 5 reel, 25 payline video slot from NextGen Gaming. Based on characters from DC Comics, it comes with a host of super powered extras including transforming symbols, re-spins with held symbols, free spins and a super spin with multipliers of up to 10x. Playable on all devices, stakes range from between 30p and £60 per spin.

The designers at NextGen Gaming have created a cracking looking game – there’s no playing card filler here. Instead expect beautifully drawn cartoon versions of Superman, Wonder Woman, Batman, The Flash, The Green Lantern, Aquaman and Cyborg. Superman is the most lucrative, awarding 300 coins if you land 5 on a payline. There’s also a standard wild that substitutes for everything bar the scatter.

Justice League isn’t just pretty to look at though – there are plenty of features hidden under the bonnet too:

Team Rescue feature – any symbol on reels 2, 3 or 4 may magically transform into a wild at random on any spin.

Super Hero Power Up feature – to trigger this, you’ll need to land 1 of the super heroes fully stacked on the left reel plus another of the same superhero in a winning combo elsewhere on the reels. The stacked symbol from reel 1 will be duplicated on reel 5 and held.

Whenever the same symbol (or a wild) lands on the middle 3 reels, it will be held too. As long as you add to the cluster of matching symbols, the re-spins continue. A payout is made when there’s a spin without a matching or symbol or you’ve managed to fill the whole screen with the same superhero.

Attack on Metropolis feature – this free spins round is triggered by landing 3 bonus scatters anywhere on the reels on the same spin. Every time a wild hits during this feature, they will be added to a meter. Every 3 wilds adds a Super Hero Spin which are played once your allocation of free spins is completed. An extra 1, 2 or 3 free spins can be added following an unsuccessful free spin too.

Super Hero Spins feature – reels 1 and 5 will spin and reveal the same stacked super hero. Wild wins are boosted by random multipliers that can reach up to 10x and can deliver some fantastic winning chances. The Team Rescue and Superhero Power Up features can both hit in the free spins or the Super Spins for even bigger results!

Superhero themed video slots are ten a penny but we really enjoyed Justice League. The design is terrific – boasting super sharp, comic book imagery and a soaring soundtrack it had an epic feel about it.

The range of features is good too – they hit at regular intervals and provide plenty of action. We’d put the variance in the medium to high range. You won’t be waiting for ages for something to happen but there are still chances to win big if the random multipliers work their magic in the Super Hero Spins feature.

DC themed slots have sometimes lacked the wow factor on offer from their Marvel equivalents. Justice League goes some way to remedying that. Well-designed and packed with extras, Justice League is an entertaining and very playable video slot that should appeal to most players, whether they’re comic book fans or not.