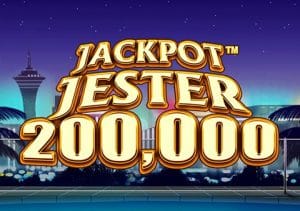 Jackpot Jester 200,000 is another release in NextGen Gaming’s Reel Stepper series which aim to breathe new life into the classic fruit machine. This one is a simple 3 reel, 5 payline game that lives up to its name by offering payouts of up to 2,000 times your bet per spin. Stakes range from between 10p and 20p to £10 and £20 per spin.

The design in Jackpot Jester 200,000 is simple but rather nicely done. The reels are set within a classic fruit machine cabinet and are backed by a swimming pool and the bright lights of Sin City. Your first decision when firing up this video slot is whether to play with 10 or 20 coins active per spin. We’d opt for the 20 as this brings the Super Game feature into play which is where things can really get interesting.

The base game action takes place on the 3 reel, 5 payline reel set at the bottom of the screen. There you’ll find cherries, lemons, plums, strawberries, diamonds and bells. The most lucrative of the standard symbols is the lucky 7 which pays 20 times your bet if you land 3 on 1 of the game’s 5 paylines. Also on display is the smiling female jester which is the games wild. As well as substituting for all other symbols, the wild also offers awards of 100 times your bet if you land 3 across a payline.

The payouts from the standard symbols are the same as the base game. It’s the wild jester that offers something a little different though. Jester wilds pay scatter style during Super Game feature. Land 3 of them anywhere and you’ll pocket 1 time your bet. Land a full 9 and you’ll hit the jackpot and trouser a massive 2,000 times your bet reward.

At any time, you can bank what you’ve won in the Super Game feature by pressing the collect button on the left-hand side of the screen. If your balance in the Super Game dips below 100 coins, you’ll revert back to the base game.

Straightforward it might be but Jackpot Jester 200,000 certainly packs a punch. This is an extremely volatile game. Don’t expect to win too often. You could land a biggie on a single spin though. This is a high risk, high reward video slot.

Classic fruit machines remain hugely popular and with games like Jackpot Jester 200,000 it’s easy to see why. It might not appeal to players used to video slots heavy on backstory and features. If you want a slice of old school action with bags of volatility, then Jackpot Jester 200,000 delivers it in spades. Alternatively, NextGen Gaming’s The Mask offers plenty of bonus features and is based on the iconic film.