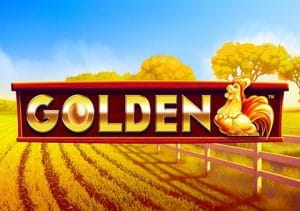 WHERE TO PLAY Golden SLOT

Take a trip to the chicken loft and try and hatch a big win in Golden, a 5 reel, 243 ways to win video slot from NextGen Gaming. This virtual trip to the farm is a jolly old affair that comes with a bonus feature that awards up to 20 free spins. Any 5-of-a-kind combinations payouts in the feature rocket thanks to a 5x multiplier. Playable on desktop, mobile and tablet devices, stakes start at 25p going up to £250 per spin.

Golden is a light-hearted affair – the reels are backed by fields of crops and a clear blue sky and include lower value A to 9 playing cards which offer payouts of up to 100 coins. Next come the eggs and a chick – 5 of these in combination award 200 coins. Things improve further with the chicken – 3, 4 or 5 of these will get you 25, 50 or 500 coins.

Like the wild, the scatter hits on the middle 3 reels only. Land 3 of them (or a combination of wilds and scatters) and you’ll trigger the Rooster Free Games feature as well as winning a 50-coin prize. Once in, you’ll be awarded an initial haul of 10 free spins. During these free spins, a special golden rooster is added to the reels which acts as both a wild and scatter. 3 of them on the same spin will add another 10 free spins to your total.

The other extra on offer here is the multiplier – this is only applied if you manage to land a 5-of-a-kind combination. Manage that and an already impressive payout will benefit from a 5x multiplier. If you’re lucky enough to get 5 of the highest value symbol in combination, expect a payout of 400 times your stake.

This trip to the farm is an amusing one – the visuals have a comic feel and the action plays out to a whistle-heavy soundtrack that’s in keeping with the jaunty mood elsewhere. There isn’t a huge range of features on offer but the free spins round has plenty of potential thanks to the wild/scatter symbol and of course, the multipliers.

We landed the bonus feature regularly but found the 5-in-a-row combinations more tricky to come by. The 5x boost can make them worth the wait though. Sophisticated it ain’t but Golden is a simple and enjoyable video slot. For some fun on the farm, you won’t go far wrong here. I also recommend you try some of NextGen Gaming’s other titles with Glorious Empire a good choice.