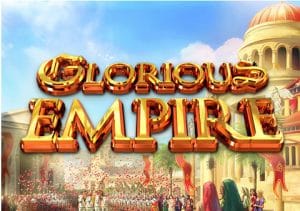 WHERE TO PLAY Glorious Empire SLOT

Take a trip back to ancient Rome in Glorious Empire, a 5 reel, 40 payline, win both ways video slot from NextGen Gaming. Boasting excellent design, this historical-themed game comes with a bonus feature where you can win up to 30 free spins complete with frozen wilds. Join the centurions and legionaries from between 50p and £1,250 per spin.

The design team and NextGen Gaming has created a fine-looking game – the reels are set against the backdrop of a Roman cityscape, complete with villas, statues and marble-columned temples. The sweeping soundtrack matches the epic theme.

The lower value symbols are the regular A to 10 playing cards. They’re joined by a selection of people and objects traditionally associated with the classical world. Look out for the warrior’s mask and the chariot which award up to 100 coins. It’s worth noting here that winning combinations can be formed from right to left as well as left to right.

Next is value is the winged horse Pegasus which will get you 125 coins followed by the Roman centurion who pays up to 150 coins. The best of the standard symbols is the blonde-haired goddess – a 5-in-a-row combo will get you 200 coins. The golden lion with swords standard is the game’s wild – it replaces all other symbols apart from the scatter. Land 2, 3, 4 or 5 of these on a payline and the cashier will ring to the tune of 10, 25, 50 or 250 coins.

The added wrinkle here is the presence of sticky wilds – whenever a wild lands during the feature, it will remain frozen in place for the duration of the feature. It’s possible to retrigger another round of free spins if the scatters fall nicely giving you up to 30 free spins.

This isn’t the most complex video slot you’ll see from NextGen Gaming – the gameplay is pretty simple with the best winning potential coming via the free spins and sticky wilds. It’s all very easy on the eye too and the backing track is top notch.

Glorious Empire is a very solid overall package, combining classy design with an impressive feature. Other similarly themed slots may offer more in the way of thrills but for simple, well-designed action with a historical slant, you won’t go wrong here. If you like the Roman theme, Gladiator Jackpot from Playtech is highly recommended.