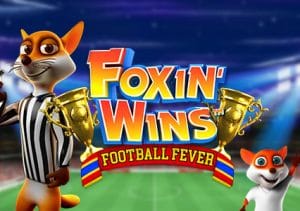 There’s plenty of animated sporting mayhem to enjoy in Football Fever, the latest video slot in the Foxin’ Wins series. Foxin’ Wins Football Fever is played using a 5 reel, 25 payline game engine and comes with a free spins feature where all payouts are boosted by a 2x multiplier. Up your stakes and spin in Super Bet mode to bring plenty of extra wilds into the action. Play on all devices from between 25p and £62.50 per spin.

Like all of the other Foxin’ video slots, Foxin’ Wins Football Fever has a supremely silly feel. The reels are set against a football stadium and include lower value playing cards alongside rolls of cash, a trophy-style snow globe and a pair of pups having a kickabout in front of Foxin’ Towers.

Like many NextGen Gaming video slots, you can up your stakes and play in SuperBet feature – special Fox Pup symbols can appear within a symbol and turn them wild. At the standard stakes these can only land on reel 3. Pay 35 rather than the standard 25 coins and you’ll see Fox Pups on reels 2, 3 and 4. Pay 50 coins per spin and you could see the Fox Pups hit on all 5 reels.

There are 2 other bonus features available in Foxin’ Wins Football Fever. First up is the Random Bonus feature which can arrive on any paid spin. The Leprechaun Shakedown and Fox Funds features can deliver an instant bonus prize.

The highlight of the game is the Free Games feature – it’s triggered by landing 3, 4 or 5 scatters on the same spin. As well as a payout of 5, 15 or 100 times your bet, you’ll also get 10 free spins. All winning combinations receive a 2x multiplier boost which sees the payout doubled. You can expect to see more Fox Pup wilds during the free spins round than in the base game too. Re-triggers can add even more free spins to your total here.

It’s a case of ‘if it ain’t broke, don’t fix’ it with Football Fever. The slapstick nature of the previous Foxin’ Wins games in the series is present and correct here. Scratch below the surface sound and visuals though and there are some decent features on offer here.

Despite its name, the football element of this game is actually pretty limited. It’s not really a video slot to get you in the mood for the World Cup, say (even though its supposed to be!). If you enjoyed Foxin’s cruise trips and stately home adventures, then you’ll find much of the same in Foxin’ Wins Football Fever though. If you like the football theme, NetEnt’s Football: Champions Cup is a decent offering.