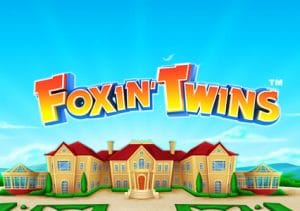 WHERE TO PLAY Foxin’ Twins SLOT

NextGen Gaming’s favourite aristocratic fox is back for another outing in Foxin’ Twins. This latest instalment takes place over 2 sets of reels, each one offering 5 reels and 25 paylines. You can expect the usual madcap design here as well as plenty of extras including transforming wilds, wild multipliers and a bonus round that awards up to 200 free games. Play on your PC, tablet or mobile device from between 25p and £62.50 per spin.

Like the other video slots in the Foxin’ series, there’s a slightly anarchic feel to Foxin’ Twins. The setting is Foxin’s country mansion. On the reels you’ll find A to 9 royal values plus golden gates, bottles of champagne and a private jet. The best of the standard symbols is Mrs Foxin’ riding her horse. Land 5 of these on a payline for a payout of 10 times your bet.

Better still is Foxin’, dressed like a country gent, who is the game’s wild. There are green and blue wilds, both of which deliver something extra depending on where they hit. More on that shortly. The game comes with 2 random features that can strike on any spin:

Foxin’ Twins also comes with a Team Pup Free Games feature – this become active after landing 3 or more scatters across both reel sets on any spin:

Both of the random extras can trigger on any spin during the free spins. A 5 of a kind winner also pays both ways during the feature.

If you’re prepared to up your stakes you can activate the SuperBet feature which brings even more extras into play. Any fox pup symbols that appear on the left set of reels turn into blue wilds. If SuperBet mode isn’t live, you’ll only see these transformations occur on reel 3. At SuperBet level 1, added wilds can only hit on reels 2, 3 and 4 and at level 2, they’re live on all 5 reels. Wild multipliers increase on the right reel set if SuperBet feature is active:

There’s plenty going on in Foxin’ Twins. The design doesn’t feel cluttered though despite all the moving parts. There’s a good range of extras on offer here too, especially if you have the funds to activate the SuperBet feature.

We realise that Foxin’ can be something of an acquired taste.

If you’ve been charmed by the cheeky fox in the previous video slots in the series, then expect more of the same in Foxin’ Twins. This version offers much bigger payouts that its predecessors due to the potential 20x wild multipliers – this can lead to wins of 20,000 times your bet on each spin! If you want games with 2 reel sets, NetEnt’s Planet of the Apes is highly recommended.