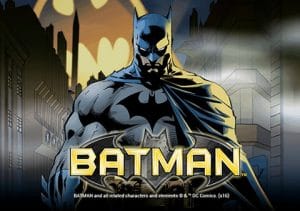 WHERE TO PLAY Batman SLOT

Gotham City’s finest tangles with the Joker in Batman, a 5 reel, 50 payline video slot from NextGen Gaming. This comic-book adaptation comes with re-spins with stacked wilds and doubled payouts as well as a battle bonus where prizes of up to 100 times your stake can be won if the Caped Crusader defeats his arch nemesis. Play from between 50p and £120 per spin.

Like the other superhero games from NextGen Gaming, Batman looks a treat. The cartoon-style imagery comes from the DC Comics and is superbly done – with Gotham City in the background, the reels include joker cards, bat tools, joke flowers, Baterangs, fake guns, spotlights, the bat bike and Batmobile, Commissioner Gordon and the Joker.

Appearing on the middle 3 reels only, Batman is the wild – whenever it forms part of a winning combination in the base game, the payout is doubled.

Batman doesn’t offer traditional free spins but it does come with a Re-Spin feature which is triggered by landing Commissioner Gordon on reel 1 and the Bat Signal on reel 5 and vice versa. You’ll then be awarded 3 re-spins. Stacked wilds can appear at random on reels 2, 3 and 4 during the re-spins – if they hit, they will remain frozen in place. All payouts during the re-spins are doubled.

The second major feature is the Descent Into Madness feature – to qualify for this, you have to be playing with the Big Bet active which will set you back an extra 10 coins per spin. To trigger it, you’ll need to land 3, 4 or 5 Bonus symbols (which also award 200, 750 or 5,000 coins).

You’ll then be transported to a gaol where the Joker’s gang are trying to mount an escape- pick a baddie. The Batarang will then strike that potential escapee and in the process, reveal a cash prize. Finally, you’ll get to take on the Joker – knock the grinning jackanape down 3 times and prevent him from escaping you’ll win an extra prize. This can be anything up to 100 times your total stake.

Batman is another excellent superhero adaptation from NextGen Gaming. The lack of a traditional free spins round will no doubt be a disappointment for some but the re-spins with stacked wilds and doubled payouts are a more than adequate alternative. As usual, it’s worth investing the extra 10 coins per spin to activate the Big Bet mode as the Descent Into Madness feature offers some decent potential.

We’d put the variance in the medium to high category. With quality visuals, a brooding soundtrack and a pair of top notch features, we’re more than happy to recommend this trip to Gotham City. I also recommend you try NextGen Gaming’s Justice League which features Batman, Green Lantern and many other superheroes!