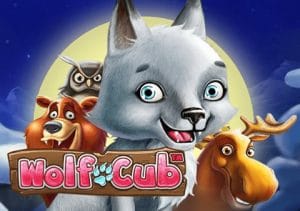 WHERE TO PLAY Wolf Cub SLOT

Join the wild animals in a snow-filled forest in Wolf Cub, a 5 reel, 20 payline video slot from NetEnt. This journey into the frozen wilds comes with the developer’s usual top end design and a game engine that offers stacked symbols, free spins and a Blizzard extra where matching symbols move to create new winning lines. Stakes range from between 20p and £200 per spin.

A frozen woodland forms the backdrop to the reels in Wolf Cub – symbols include hearts, diamonds, clubs and spades which are all shaped out of carved wood. Land 5 of each playing suit in a line and you’ll pocket 4 times your stake.

The most lucrative symbol on show in Wolf Cub is the wild – as well as replacing all other symbols apart from the scatter it also awards 5, 25 or 100 times your stake if you land 3, 4 or 5 in combination.

Wolf Cub comes with a Free Spins feature – it’s triggered in the usual manner by landing 3 or more scatters (the silhouette of the moon) anywhere on the reels on the same spin. Once active, all of the reels that contain a scatter will spin. Instead of standard symbols, the spinning reels just feature numbers. When this spin lands, all of the numbers on view are totted together. This is how many free spins you’ll be awarded and can reach up to 115!

There’s a second mini feature that can land during your free spins – the Blizzard feature is activated when a symbol lands fully stacked on reel 1. All symbols that match the stacked symbol elsewhere on the reels spread towards reel 1 and in the process, create new, and potentially winning, combinations.

We rarely have much cause to grumble about the design of NetEnt video slots and Wolf Cub is another looker. The cartoon-style visuals are super sharp and the jolly backing track complements the action nicely. The range of features isn’t quite as impressive as the visuals.

The Free Spins feature is decent enough though, especially if you trigger the Blizzard extra. Manage that with 1 of the higher value symbols and Wolf Cub could leave you howling.
Wolf Cub BS review – change last paragraph to:

As far as features go, there isn’t a huge variety on offer. The Free Spins feature offers the best winning potential, especially after if the Blizzard feature lands with a high value symbol. Get lucky there and the Wolf Cub could leave you howling with delight.