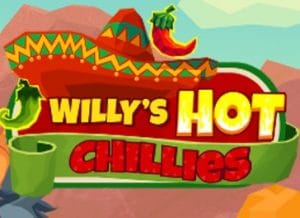 Enjoy some wild Mexican-themed action courtesy of NetEnt in the Willy’s Hot Chillies slot. Played using a 5 reel, 20 payline game engine, this trip south of the Rio Grande comes with classy, colourful design and a good range of extras. They include multiplier wilds and Willy’s Hot Wheel feature that can cash prizes of up to 30 times your bet which you can boost with big potential multipliers. Find out more in our in-depth Willy’s Hot Chillies review.

The Willy’s Hot Chillies slot comes with 5 reels, 3 rows and 20 fixed paylines. A win is created by seeing 3 or more matching symbols across any of the paylines. Combinations need to be on successive reels from left to right and starting from reel 1.

You can play the game from between 20p and an eye-watering £400 per spin. Click on the coins in the bottom left-hand corner of the screen to amend your stake.  It’s possible to set between 10 and 1,000 autoplay spins. Click on the advanced settings tab to set win and loss limits. You can also play in quick spin mode if required or set the spacebar to spin. Like most slots in the NetEnt catalogue, it’s all very intuitive and simple to do.

The Willy’s Hot Chillies RTP is 96% which is about average. With fairly frequent wins, the variance is in the middle. Most wins will be smaller (under 15 x bet) in the base game with the bigger wins coming from the multiplier wilds and the Willy’s Hot Wheel feature. In the latter, the max win is 3,000 x your total bet.

NetEnt has packed some decent features into Willy’s Hot Chillies. Central to the action are multiplier wilds. Trigger Willy’s Hot Wheel feature for even more extras.

The chillie wild symbol can also come with multipliers attached which can boost payouts by 2x, 3x, 4x or 5x. Land more than one multiplier wild in the same winning line and their values are added together.

For example, the payout for a winner that include a 3x wild and a 4x would receive a 7x multiplier boost. Wilds can land anywhere apart from reel 1 and can fill between 1 and 4 positions on any reel. A rather angry looking Willy is the game’s bonus symbol. When you land this on reel 1 and fully stacked wild on one of the other reels, you’ll trigger the Willy’s Hot Wheel feature.  This is like a conveyor belt that is full of goodies.

The stacked wild from the trigger spin will turn into a Fire Pointer and will also reveal how many spins of Willy’s wheel you’ll start with. Land something above the Fire Pointer and you’ll win that prize. Awards include:

You can see the value of the multiplier in the top left-hand corner of the screen. The coin wins are then subject to the chillie multipliers. The more Fire Pointers, the more spins which will lead to bigger payouts. One area in which Willy’s Hot Chillies really does excel is in its design. NetEnt slots are usually very easy on the eye and that’s certainly the case here. The visuals are terrific. There’s a slightly blocky quality to the brightly coloured imagery which is superbly done.

On the reels you’ll see heart, diamond, club and spade symbols alongside a quartet of higher-value symbols that are related to the Mexican theme. These include a taco, a bottle of chili sauce and a donkey pinata. The most rewarding symbol is the treasure chest full of gold.

This pays 1, 2 or 3 x your total bet if you land 3, 4 or 5 on a payline. Not the hugest number, we grant you. Remember, the multiplier wilds can give these a big leg up. The red-hot chili symbol is the game’s wild. This substitutes for all the standard symbols when it forms part of a winning combination.

Backing the action is a bouncy, mariachi-style soundtrack which is a perfect fit for the theme. It all comes together very well. No grumbles then about the design. The bright, colourful design works perfectly well on a small screen device which makes Willy’s Hot Chillies mobile slot well worth considering.

The design in Willy’s Hot Chillies is as good as you’ll see anywhere. Both the sound and visuals are fantastic. The gameplay doesn’t quite match up to the high spec design though. The multiplier wilds are a perfectly playable addition.

Willy’s Hot Wheel feature is a decent enough bonus round. It’s not the most exciting feature though as wins will be below 100 x your total bet in most cases. There isn’t a traditional free-spins round here either which is a bit of a disappointment.

This could have been a really good slot. Instead, it’s just missed the target. It’s all decent enough as far as it goes. We just wish they’d gone a little further. If you fancy more red hot chilli action, the Extra Chilli Megaways slot from Big Time Gaming is recommended. For an alternative Mexican flavour, Esqueleto Explosivo 2 by Thunderkick is worth looking into.

❓ What is the Willy’s Hot Chillies slot RTP?

The Willy’s Hot Chillies return to player rate is a straight up 96%. That’s round about a par score for a slot RTP.  On average for every £100 wagered, £96 is returned via the prize pool payouts. There are plenty of frequent wins in the base game due to the multiplier wilds.

🥇 What features does Willy’s Hot Chillies come with?

Spicing up the base game are multiplier wilds which can deliver 2x, 3x, 4x or 5x multipliers boosts. These combine if you land more than one on the same spin. Trigger the Willy’s Hot Wheel feature and you’ll spin to win cash prizes of between 1 and 30x your total bet which are subject to chillie multipliers. Find out more in the bonus features section.

🎰 Is there a Willy’s Hot Chillies mobile slot?

⚡ What is the Willy’s Hot Chillies slot theme?

You won’t see many better slots when it comes to design than Willy’s Hot Chillies. The visuals here are superb, backed by a bouncy mariachi-style soundtrack that delivers plenty of Mexican-themed atmosphere.