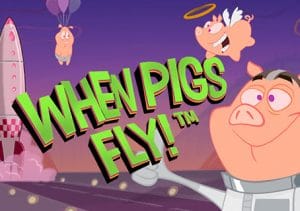 WHERE TO PLAY When Pigs Fly SLOT

Blast off into space with a gang of porky astronauts in When Pigs Fly. Powered by Net Entertainment, this 5-reel video slot comes with an expanding game engine that starts at 45 ways to win but can reach an enormous 3,125 ways to win. Also on offer are wild substitutions, re-spins and a free spins feature. Play on all devices from between 50p and £100 per spin.

As you’d expect from something called When Pigs Fly, this slot has a real madcap feel – symbols on the reels include lower value playing cards, an aviator’s hat, balloons, an airship, a female aviator and a male spacepig. Keep a special eye out for the When Pigs Fly logo. This is the most lucrative of the standard symbols, awarding 1,000 coins if you manage to land a 5 symbol combination. The wild replaces all other symbols and can land on all reels apart from reel 1.

The action starts out on a 1x3x5x3x1 reel game engine but this can change rapidly – after every winning spin, you’ll be awarded a re-spin and the reels will expand by 2 symbols. With each subsequent re-spin the number of ways to win increases from 405, 675, 1,125 and 1,875.

If you manage to land 5 successive re-spin wins, you’ll trigger the Free Spins feature – here you’ll be awarded 8 free spins on a 5×5 reel set that offers a whopping 3,125 ways to win.

As you’d expect from a NetEnt creation, this space adventure is very well designed – the cartoon visuals are nicely done and come complete with some slick animations. Of course all that counts for very little if the features don’t come up to snuff. Thankfully they do.

The re-spins come along at regular intervals and offer some spectacular winning chances. The medium variance means that you won’t be waiting ages for a winner but still have hopes of bagging a bumper score. There are wins of 962 times your stake in the Free Spins feature which is good.

If you’ve ever played NetEnt’s Reel Rush, you’ll have a pretty good idea of what to expect here as the game engine and features are pretty much identical. Your preference between the 2 will largely come down to the theme. We enjoyed the cartoon antics of these piggy spacemen and are more than happy to blast off with them.

Flying pigs may be a symbol of a seemingly impossible event but decent wins are very much possible here if you manage to get on a good roll of re-spins. I also recommend you try Invaders from the Planet Moolah by WMS and Piggy Riches by NetEnt that have a similar theme.