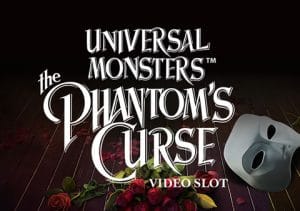 WHERE TO PLAY The Phantom’s Curse SLOT

Join a masked musical genius and a beautiful soprano on a quest for gold and glory in The Phantom’s Curse. Based on Gaston Leroux’s novel and the subsequent West End stage show, it’s a 5 reel, 40 payline video slot from NetEnt. Look out for sticky wild respins, a picks round and a free spins bonus. Stakes range from between 20p and £200 per spin.

The grand Paris Opera house forms the backdrop to the reels in this slot version of The Phantom’s Curse – the lower value playing card suit symbols are joined by a dagger, a mirror, a yellow rose, a ring and opera star Christine. The best of the payers is the Phantom himself who’ll get you 10 times your stake if you land 5 on a payline. The Masked Phantom is the standard wild. 1 thing to note, wins are created both left to right and right to left.

Finally, there’s the Free Spins feature which is triggered by landing the chandelier scatter symbol on reels 1, 3 and 5. During the free spins, you’ll notice a chandelier to the right of the reels which is held in place by 5 ropes. Each rope relates to a reel.

Whenever a Phantom symbol lands, a section of the rope from that reel will be cut from the chandelier. Land a masked phantom on that reel after the rope has been cut and it will become a sticky, stacked wild. Carry on spinning until all 5 of the ropes have been cut.

The range of features available in The Phantom’s Curse offers plenty of variety which makes this a very playable game. As usual from NetEnt, the design ticks all the boxes. The opera house setting is superbly done and the operatic backing track is right in keeping with the theme.

We’re not really fans of Andrew Lloyd Webber’s brand of stage musical. This video slot version of The Phantom’s Curse works well though, combining top-end design with some enjoyable features. We’d be happy to splash out for a ticket for this particular show as it offers wins of up to 800 times your stake on each spin.