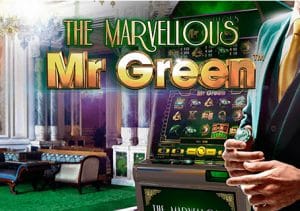 WHERE TO PLAY The Marvellous Mr Green SLOT

Join a dandy gentleman gambler at his luxury pile in The Marvellous Mr Green. Powered by Net Entertainment, this 5 reel, 20 payline video slot comes with base game multipliers that can randomly boost your payouts by up to 5x and a free spins feature where the multipliers can top 6x. Try your luck from between 20p and £100 per spin.

The sound and visuals in The Marvellous Mr Green have a classy feel – with a laid back, jazzy soundtrack noodling away in the background, the reels are dominated by green and gold. Joining the lower value playing cards are an umbrella, globe, vintage sports car, country mansion and bars of gold.

Mr Green’s bowler hat is the game’s wild, replacing all other symbols apart from the scatter and free spin multiplier meter symbols. Unsurprisingly, the gold bars are the top payer – landing 5 gold bar symbols will net you a cool 2,000 coin payout.

There’s scope to add to that haul too courtesy of the random multiplier that can hit on any spin in the base game and boost your payout by 2x, 3x or even 5x.

The Marvellous Mr Green comes with a Free Spins feature which is triggered by landing the Mr Green casino chip. Landing 3, 4 or 5 of them anywhere on the reels will get you a payout of 4, 25 or 100 times your total stake as well as triggering the feature.

Here you’ll be awarded an unlimited number of free spins – keep an eye on the roulette wheel symbol which lands on reel 5 during the feature. When it lands, it will reveal a multiplier value of between 2x and 6x which will be applied to that free spin. The roulette wheel also includes a hand – land on the hand and the feature will draw to a close.

Elegant and understated, The Marvellous Mr Green isn’t a flashy game – don’t mistake it for being boring though. The multiplier can certainly get things moving quickly in both the base game and feature rounds. The variance here is in the medium range, offering a balance of payouts.

With a luxurious feel, The Marvellous Mr Green is a simple yet entertaining title – he may be lacking in bling but with top payouts of some 463,000 coins, he can still deliver plenty of riches if your luck is in. 1 final thing, this game is exclusively available at Mr Green Casino.