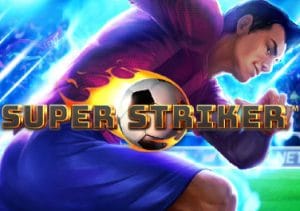 WHERE TO PLAY Super Striker SLOT

Go for goal in the Super Striker slot, NetEnt’s attempt at creating the ultimate football-themed game. As you’ll find out in our detailed Super Striker review, this slot is a little unusual in a number of respects. First, it’s played using a 3 reel, 3 row game engine that offers just 5 paylines. The game also comes with 2 scatter symbols. One of them awards a random win. The other can trigger a series of streak-style free spins. Work through the levels to bring multipliers into play which can reach up to 10x. Collect symbols during a defined number of spins during the Bet Slip feature which can award even more multiplier prizes. Is Super Striker a Champions League or a National League performer? Let’s have a closer look.

The Super Striker bonus features offer a twist on some classic features. There’s a multi-level streak spin round where multipliers increase the further you progress. More prizes are up for grabs courtesy of the Bet Slip features. Land a specified amount of a designated symbol in a limited number of spins to win extra prizes. First though, the scatter bonuses.

Land a golden (football) scatter in the base game and you’ll receive an instant cash prize. The amount varies each time but will be between 10 and 20x your bet.

The main bonus is the Free Spins feature. It’s triggered by landing 3 of the standard black and white football scatter or a combination of 2 standard scatters and 1 golden scatter.

The free spins round is played across a number of levels. If you fill the reels with golden scatter symbols, you’ll advance to the next level. Your scatter wins are in turn boosted by a multiplier. The more levels you progress through, the bigger those multipliers can get.

When you progress to a new level, the reels are cleared of symbols. A payout is made each time you advance a level. The round ends when you are out of free spins or you have filled up the whole of the screen with golden scatters during the Level 5 spins.

In some, but not all, casinos, you’ll have the option to pay extra and trigger a side bet feature. To activate the Bet Slip feature, click on the slip to the right of the reels. You’ll then have the option to pick a symbol. You can then gamble. If you land that symbol a certain number of times during a defined period of spins, you’ll win a special prize.

The prizes on offer from each symbol vary. For example, here’s what’s on offer when you collect the lowest value goal symbol.

Compare that with the most lucrative golden footballer symbol.

If you want to play, click on the Bet Slip then choose a symbol, select the number of spins and adjust your bet size.

The game engine is a simple 3×3 grid which offers 5 paylines. A win is formed by getting 3 matching symbols across any of the 5 paylines. You can play with coin values of between 2p and £15 which means overall bet levels of between 10p and £75 per spin.

You can set autoplay to run for between 10 and 1,000 spins. The advanced settings allow you to set stop limits after you’ve won or lost specified amounts or if you win the free spins feature. In the settings, you’ll have the option to play in standard or quick play mode.

The overall RTP in Super Striker is 96.04%. That improves to 96.93% in the Bet Slip feature. The max payout is 5,000 x your total bet which will come from the 10x multiplier in level 5 of the Free Spins feature.

Super Striker Theme – experience the roar of the crowd The footballing theme is nicely realized in Super Striker. The design is very simple but the visuals are clear against the green football pitch backdrop. On the reels are single, double and treble goal symbols in a style you might see on a stadium scoreboard.

They’re joined by red football boots, gold football boots and a player. The most rewarding symbol is the gold player kissing a medal. This pays 100x your total bet if you land 3 on a payline.

These aren’t the sharpest visuals you’ll see but they do the job well enough. You’ll hear the roars of the crowd as you spin which gives the game a decent atmosphere.

The NetEnt game interface is straightforward and simple to use. Setting stake sizes, autoplay and consulting the paytable is easy. The simple design and basic features work well on smaller devices. It’s not the flashiest slot you’ll see as far as design goes but it does the job.

Super Striker Thoughts/Opinion – not much flair but some top features

I wouldn’t call Super Striker the slot equivalent of Lionel Messi or Cristiano Ronaldo. The unfussy design isn’t very flashy and the gameplay is simple. Think of Super Striker as more of a big, burly striker who doesn’t offer much in the way of flair but delivers plenty of goals.

The free spins round is the key to success here. Get on a hot streak with the multipliers and Super Striker can really hit the back of the net – to the tune of 5,000 x your bet per free spin.

If you want football slots, NetEnt’s Football: Champions Cup is worth a look – so too is Bicicleta by Yggdrasil Gaming.

❓ What is the Super Striker RTP?

🥇 Can you play Super Striker on mobile?

Yes. The simple design and gameplay work rather well if you’re playing on a tablet or mobile. You won’t lose anything compared to playing on a laptop or desktop.

🎰 What is the Super Striker max win?

The most you can win from the Super Striker slot is 5,000 x your total bet – this is achieved in level 5 of the Free Spins feature with the 10x multiplier.

⚡ What are the Super Striker bonus features?

The main feature is a streak-style free spin round. Each scatter awards a prize which is boosted by a multiplier which rises as you progress through the levels. Achieve level 5 status for a 10x boost.