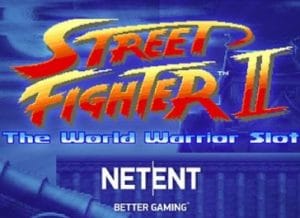 WHERE TO PLAY Street Fighter II: The World Warrior SLOT

Based on the all-time classic video game, the Street Fighter II: The World Warrior slot is a highly unusual 5 reel, cluster pays game from NetEnt. Featuring 8 classic characters, it comes with fantastic retro visuals and plenty of extras. In our Street Fighter II: The World Warrior slot review, you’ll find out about Avalanche reels, wild extras, colossal symbols, Battle Spins which can trigger features including free spins with multipliers and a Car Smash bonus that can deliver instant win prizes. There’s absolutely loads going on here. Let’s have a closer inspection.

NetEnt has packed a huge variety of bonuses and features into Street Fighter II: The World Warrior. The gameplay certainly takes a bit of getting used to. We’ll start with the easy stuff.

Land a winner and the successful symbols are removed. An Avalanche follows with new symbols dropping in to replace them. These Avalanches continue as long as a new winning combination is formed.

It’s here that things get a little more complicated. You start the game by choosing 1 of the 8 character symbols. They will then face off against one of the 7 opponents. Different characters offer different levels of volatility. You can change character after you’ve finished playing one of the features.

For example, Ryu’s Combo awards 3 wilds on the same row while Dhalsim’s Combo places 3 or 4 wilds on random positions on the reels. Here’s a full list of all features you can choose from along with RTP % associated with each character:

This round is triggered if you manage to get your opponent’s health points down to zero in the base game. The round is a multi-level battle free spins round. The gameplay is similar to the base game where landing wins with specific symbols increases or decreases health points.

Each level has a different opponent and comes with a multiplier. If the opponent’s health points drop to zero, you’ll win the contest and advance to the next level. If you lose the battle, the round ends.

The number of free spins you’ll receive depends on the outcome of the battles. There’s no potential limit to how many free spins you could land here. If you win the Level 4 battle, you’ll win a bonus prize of 100 x your total bet.

Here, you can use a portion of your free spin wins to restart the Beat the Boss Free Spins feature. The health points of both your character and opponent are reset to 25 and battle resumes. More importantly, the RTP increases between 98.7% and 100%.

This round is triggered if your character loses all their health points in the base game. Here, you control you character as he or she smashes up a car and wins cash prizes in the process. Prizes of between 5 and 15 x your total bet are on offer in this round.

The Street Fighter II: The World Warrior slot is played on a 5×5 grid and uses a Cluster Pays mechanic. Winning combinations are formed by landing clusters of 4 or more matching symbols. The bigger the cluster, the better the rewards on offer.

Stakes here start at 20p but can rise to a ridiculously high £700 per spin.  NetEnt’s standard autoplay options are available here. You can set up to 1,000 auto spins and set win and loss limits to your taste. You can ramp up the pace by selecting Quick Spin in the settings tab.

The RTP varies ever so slightly depending on which character you choose to play as, ranging from 96.02% up to 96.08%. The overall RTP is 96.06%. The RTP increases dramatically to between 98.7% and 100% if you use the Insert Coin Gamble feature.

As far as variance goes, Street Fighter II: The World Warrior Slot is in the medium range. The max win per spin is not yet known. The design in the Street Fighter II: The World Warrior online slot is superb. The blocky graphics could come straight from the video game. Each fighter has their own backdrop which are uniformly excellent. The same is true of the electro soundtrack and the roars of the fighters that mark a winning spin.

The retro theme is perfectly realized here. It really is excellent. The character symbols are very well drawn. They each offer payouts of 30x your total bet if you land a cluster of 16 or more of them on the same spin. Symbols can land as singles or as 2×2 colossal symbols.

NetEnt’s game interface is simple to use. You can set stake levels and autoplay from the game page. For the paytable and other settings, click on the 3 lines in the bottom left-hand corner of the screen.

You can play Street Fighter II: The World Warrior slot on your mobile. This video game adaptation works very well on a small screen device. The blocky graphics are fine on the Street Fighter II mobile version. The gameplay delivers too.

At first glance, Street Fighter II: The World Warrior looks massively complicated. It did take us a little while to get used to the rather unusual gameplay and features. Once you’ve got your eye in, there’s plenty to like here. The design is first class and a cracking interpretation of the retro video game.

The gameplay offers plenty of variety too, both in the base game Battles and in the Free Spins and Car Smash bonuses. Mix all those elements together and in Street Fighter II: The World Warrior slot, you have a knockout slot.

NetEnt are known for created branded slots. Their best game is Vikings which is based on the television series (of the same name) and offers 10,000 x bet wins per free spin.

❓ Is the Street Fighter II: The World Warrior slot volatile?

The overall variance here is in the medium range. You can alter the volatility depending on which fighter you choose. You’ll get a steady stream of smaller wins in the base game with the bigger payouts in the Beat the Boss Free Spins feature due to the multipliers which can reach 10x.

🥇 What is the Street Fighter II: The World Warrior slot RTP?

The Street Fighter II: The World Warrior return to player rate is 96.06% on average. Each character you choose has a different RTP setting ranging from 96.02% up to 96.08%. If you use the Insert Coin Gamble feature, the RTP rises up to 100%.

🎰 Is there a Street Fighter II: The World Warrior mobile slot?

Yes. Street Fighter II: The World Warrior is available for mobile play on Android, Apple and Windows devices meaning it can also be played on desktop and tablet devices. You can also play the game here at CasinoManual.co.uk for free with the device of your choice.

⚡ Is Street Fighter II: The World Warrior based on the popular video game?

Yes, the slot is based on the all-time classic video game that was hugely popular in the late 1980s and early 1990s. The Street Fighter II video game is 1 of the top 3 highest-grossing video games of all time and the most popular fighting game ever.