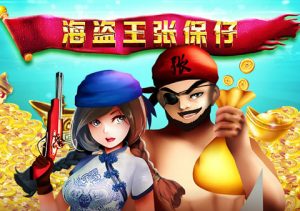 Join a Chinese sailor on a quest to pillage some treasure in Pirate From the East, a 5 reel, 15 payline slot from NetEnt. The highlights of this seafaring adventure are the wilds that treble payouts when they for part of a winning line and the bonus round that awards free spins with multipliers that can reach 6x. Set sail on your computer, tablet or smartphone from 15p to £75 per spin.

Pirate from the East isn’t the flashiest slot to set sail from NetEnt waters as far as design is concerned. In fact, it’s rather simple by the developer’s usual standards. The reels are set on the deck of a pirate ship. Joining the lower value playing card values are barrels of gunpowder, a compass, pistols and knives and a ship. The most rewarding standard symbol is the treasure chest. Land 5 of these on a payline for an award of 133.33 times your total bet.

Giving your winning chances a real boost is the male pirate who is the game’s wild. As you’d expect, he replaces all the standard symbols. He also delivers a chunky 3x multiplier boost whenever he appears in a winning line. That trebling payout can have a big impact, taking a top award of 133.33 times your stake up to an altogether more impressive 400 times your bet.

The female pirate is the scatter. Land 3, 4 or 5 of her anywhere on the reels on the same spin and you’ll receive a payout of 4, 15 or 100 times your total bet. You’ll also activate the Free Spins feature. The number of free spins and multipliers on offer are determined via quick pick.

You could get up to 28 free spins initially with multipliers reaching a maximum of 6x. Every scatter landing during the feature will add 1 more free spin to your tally – with no limits.

The Pirate from the East slot is a straightforward game. The design doesn’t have the bells and whistles on display in some of NetEnt’s flashier releases. It’s a similar story with the gameplay which is pretty simple too. It is the same as the Piggy Riches game (from NetEnt) in case you’re wondering.

Multipliers and free spins are always a good combination though and they provide enough action here to keep things interesting. Medium to high variance and with an RTP of 96.38%, you can pocket 2,400 x bet on every free spin (with the 6x multiplier).

If you’re after a raft of extras, then this probably won’t be for you. If you want a simple seafaring yarn, then Pirate from the East offers just that. If pirates are your thing, Quickspin’s Pirate’s Charm is recommended.