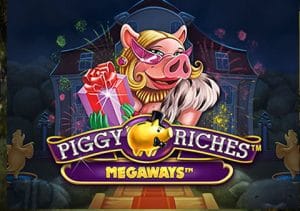 NetEnt’s takeover of Red Tiger Gaming means we can expect to see plenty of Megaways slots in the future and they’ve got the ball rolling with Piggy Riches Megaways. Played using a 6 reel, cascading reels game engine, the number of Megaways can reach up to 117,649. Also in play are stacked Mega Wilds that can fill up to 3 reels on any spin. These wilds also come with multipliers of up to 7x attached. Trigger the feature and you’ll win up to 22 free games with an expanding multiplier that can start at 10x. Stakes in this medium to high variance game range from between 10p and £10 per spin.

Take a trip to Piggy Towers

The design in Piggy Riches Megaways is nicely done. With a stately home in the background, you’ll see A to 10 royals alongside a piggy bank, a purse stuffed full of cash, car keys and a gold credit card. The money pouch is the most rewarding symbol. Land 2, 3, 4, 5 or 6 of these on adjacent reels on the same spin for an award of 0.2, 1, 2, 5 or 20 times your total bet.

Land a winning combination and the successful symbols are removed and new ones drop down to replace them. The cascades keep on coming as long as a new winner is created.

The number of each symbols on each reel will vary from between 2 and 7 on each spin. This also determines the number of ways you can create a winning combination. If the reels reach their maximum size, you’ll have 117,649 Megaways active.

Helping your winning chances is the Lord of the Piggy Manor who is the wild symbol. This can fill up entire reels on the same spin. The Mega Wilds also come with multipliers of up to 7x attached. If you get multiple wilds, the values are combined for even bigger wins. Land 3 of the scatter symbol anywhere on the same spin and you’ll activate the Free Spins feature – you then get a spin of the bonus wheel. Give it a spin to reveal how many free spins you’ve been awarded (up to 22) and what the starting multiplier will be (up to 10x).

Each time you land a cascade win, the multiplier increases by 1x which can really get things moving. There’s no limit to how high the multiplier can go – each scatter that appears will also add 1 more free spin to your tally (again with no limits).

NetEnt’s first Megaways outing is a very playable one. They’ve kept the heart of the original Piggy Riches release but ramped up the gameplay and the potential wins. The free spins, complete with the expanding multipliers, offer the best opportunities. Payouts here can reach up to 10,474.5 x your bet from a single free spin.

This is pretty feisty on the variance front with the volatility on the north side of medium. The RTP is 95.71%. The first Piggy Riches became a firm fan favourite. We expect this Megaways version to do just the same. I’m sure we will see plenty of NetEnt Megaways slots in the near future – such as Starburst Megaways and/or Gonzo’s Quest Megaways.