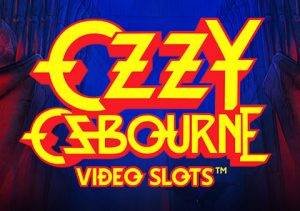 WHERE TO PLAY Ozzy Osbourne SLOT

The Prince of Darkness is the latest musician to get the video slots treatment as part of NetEnt’s Rocks series in the Ozzy Osbourne video slot. Played using a 5 reel, 20 payline game engine, it comes with re-spins, free spins with special Charge Ups that deliver coin wins, wilds, multipliers or upgrades when you trigger the feature. Stakes here range from between 20p and £100 per spin.

The design in this game could come straight from an Ozzy Osbourne fan’s T-shirt. On the reels you’ll find spade, club, diamond and heart symbols that are embellished with roses, crucifixes, skulls and ravens. They’re joined by a gurning Ozzy in 4 different poses. The best of these pays 4, 12 or 50 times your bet if you land 3, 4 or 5 on a payline. The bat is the wild and replaces all symbols bar the scatter.

Land 2 scatters on reels 1, 3 or 5 on the same spin and you’ll trigger the Re-Spin feature where you will receive a re-spin complete with a Symbol Charge Up (full details on that, below).

Before a re-spin and every free spin, the Symbol Charge Up comes into play. The symbol spinner first determines which symbol is the subject of the extras. Then, depending where the Feature Spinner lands that symbol then benefits from one of the following modifiers:

Landing 3 scatters on the same spin awards 4 free spins in the Free Spins feature. You can add to this number if you play with the Bonus Bet activated. The Charge Up extras are active on each free spin.

To activate the Bonus Bet feature, you’ll play at stakes of 40 rather than 20 coins per spin meaning your stake will double. In return, you’ll receive 5 rather than 4 free spins. Multipliers in those free spins can rise from 2x and 3x up to 5x and 7x. These multipliers can be added together up to 12x.

The Ozzy Osbourne video slot is another decent rock-themed slot from NetEnt. The dark, creepy design is just what you’d expect from a game based on the Brummie Prince of Darkness. You’ll hear some of his biggest hits blasting away in the background while you spin too.

The gameplay doesn’t offer a huge amount of variety but the Symbol Charges can really ramp up the action. If you’re not an Ozzy fan, then you probably won’t be coming back here again and again. If you are, then it’s well worth a look. You can also win up to 2,500 times your bet on each free spin! If you like your music, NetEnt’s Guns ‘N Roses is recommended.