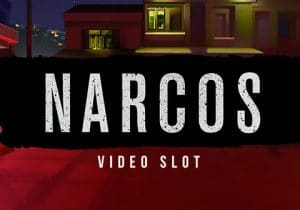 WHERE TO PLAY Narcos SLOT

Set in 1 of the 9 Worlds of the Norse religion, Asgard’s Thunder is an epic 5 reel, 20 payline video slot that comes with classy visuals (yes, really) and simple but potentially explosive gameplay. Played using a 5 reel, 20 payline game engine, stakes start at 20p, rising to a maximum of 40p per spin. You won’t find a huge range of extras here but the

Based on the Netflix television series

The high stakes game of cat and mouse between Colombian drug lord Pablo Escobar and American law enforcement provided amazing source material for the Netflix series Narcos and now NetEnt has created a video slot version. Superbly designed, this 5 reel, 243 ways to win game comes with plenty of extras including walking wilds, drive-by shootings where symbols can turn wild, a streak respin round and free spins. Play on all devices from between 20p and £400 per spin.

NetEnt has thrown the kitchen sink at Narcos as far as design goes. The comic book style visuals are terrifically well done. Even the lower value royal values have been embellished with guns and grenades. More rewarding are the light aircraft, flamingo and quartet of character symbols. The top payers are the DEA agents Murphy and Pena. Land 3, 4 or 5 of these on adjacent reels for a payout of 1, 4 or 15 times your bet.

The agent’s shield is the wild. This can land on all 5 reels and replace all of the standard symbols. The wild also offers payouts of up to 300 coins per payline. When a wild forms part of a winning combination it turns into a Walking Wild with the Walking Wild feature activated. These move 1 reel to the left on each spin that follows until they drop off reel 1.

Drive-by feature – on any spin you could see a car pull up behind the reels. A shooter will then let off a volley of bullets. The high value symbols hit then turn into wilds and a new payout configuration is made.

Locked Up feature – land 3 of the Escobar Locked Up Poster symbol on the same row to activate this unusual streak style respin. These 3 symbols are then given a value of between 1 and 10 times your bet. 3 respins are awarded where the reels are made up of just Locked Up and Golden Locked Up symbols.

If a standard Locked Up symbol joins a winning cluster, it joins up and the respins revert to 3. Hope to see a Golden Locked Up symbol appear adjacent to the cluster though as it increases starting coin value, awards a multiplier of 2x or 3x or offers a symbol upgrade that deliver bigger rewards.

Free Spins feature – 10 free spins are awarded when the scatters lands reels 1, 3 and 5 on the same spin. Standard higher value symbols can randomly turn into Walking Wilds during this round. Even if your allocation of 10 free spins is over, the feature will continue as long as there are Walking Wilds anywhere on the reels.

Narcos is another classy branded video slot from NetEnt. Design wise, it’s excellent. They haven’t shirked on the features either which provide plenty of action and variety. Narcos offers top payouts of 1,506 times your bet in the Free Spins feature.

Even if you’ve never heard of Pablo Escobar, the impressive visuals and quality extras make Narcos well worth investigating. For more branded titles, head to our Movie Slots section where you’ll find NetEnt’s Vikings and Playtech’s The X-Files amongst many others.