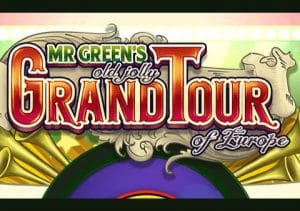 They say that travel broadens the mind but can it also expand the bank balance? That’s the goal in Mr Green’s Old Jolly Grand Tour of Europe, a 5 reel, 25 payline slot powered by Net Entertainment that comes with re-spin, expanding and multiplier wilds. Up to 30 free spins are also on offer via the bonus feature. Available to play on all devices, set off from between 25p and £50 per spin.

Visually, Mr Green’s Old Jolly Grand Tour of Europe harks back to the golden age of travel – bobbing away behind the reels are Montgolfier-era balloons, steam engines, horse drawn carriages and transatlantic ships. The old world feel is maintained on the reels themselves. Joining the lower value playing cards are horse shoes, lamps, hot air balloon baskets and a ship’s anchor. The Grand Tour logo is the most lucrative symbol – 5 of these in a line will get you a 500 haul coin.

The star symbol is the game’s wild – it only appears on the 3 central reels and can add some tidy little extras as well as performing its usual substitution magic. When the wild lands in the base game, 1 of 3 random extras will be awarded. They are a re-spin with the wild locked in position, an expanding wild which fills and entire reel or a multiplier which doubles your payout.

If you like slots with free spins, then you won’t be disappointed either – land 3, 4 or 5 of the free spins symbol and you’ll trigger the Free Spins feature and receive 10, 20 or 30 free spins. The wild extras are even better in the feature than in the base game. Now when they land, you can look forward to a re-spin with an expanded wild, a re-spin with a doubling 2x multiplier or an expanded wild with a 2x booster.

Good design is a given with NetEnt created slots and Mr Green’s Old Jolly Grand Tour of Europe is no exception. The graphics have a certain cartoon quality but are super sharp. The same goes for the super smooth animations and gameplay. The soundtrack is catchy enough but seems slightly at odds with the grand tour theme. That’s only a minor gripe though.

It doesn’t offer a huge amount of features but the ones on offer are nicely done – the wild extras help things along in the base game and have the potential to deliver extremely well during the free spins feature.

Mr Green’s Old Jolly Grand Tour of Europe is a typically classy collaboration from Mr Green Casino and NetEnt – it’s not the most revolutionary slot you’ll see but if you want quality visuals and solid gameplay, you won’t be disappointed.