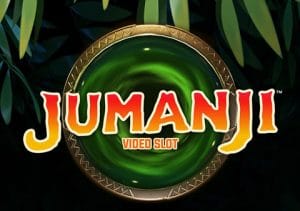 WHERE TO PLAY Jumanji SLOT

The 1995 movie Jumanji has spawned a 2018 film re-boot and now a 5 reel, 36 payline video slot from NetEnt. Based on the tale of the man who became trapped in a board game, it comes with 4 base game modifiers that award extra wilds, wild reels, sticky symbols and symbol shuffles. There are also 4 free spins rounds, complete with 1 of those modifier extras. Play, on all devices, from between 10p and £200 per spin.

As you’d expect from a tie-in between NetEnt and Sony, plenty of effort has been put into the design of Jumanji. The 3x4x5x4x3 reels are surrounded by a board game trail which comes to life during the Board Game. On the reels you’ll see the usual lower value playing card values plus pelicans, crocodiles and rhinos. The most rewarding symbol is the lion which offers awards of up to 14 times your bet per payline. There’s also a standard wild that substitutes for all symbols bar the scatter.

Livening up the base game are 4 modifier extras that can hit at random on any spin:

The other main attractions in Jumanji are the free spin rounds which become active following a trip around the Board Game – you can access this by getting 3, 4 or 5 Jumanji board game scatters which give you 6, 7 or 8 rolls of the dice. Once in, you’ll spin a pair of dice and move a counter around the board.

In the 4 corners of the board are the quartet of free spin rounds. Each corner has its own modifier extra. Land a counter in a corner position and you’ll trigger the free spins with their associated Sticky Vines, Monsoon Wilds, Monkey Mayhem or Wild Stampede modifiers active:

You could also land on the Mystery feature square – when this happens, you’ll spin the carousel which can award 1 of the 4 free spin features (described above), an instant win of up to 10 times your bet or extra rolls on the Jumanji board. In theory, you could play all 4 free spins features and win lots of cash prizes in 1 go!

Jumanji proved to be a big hit at the box office when it was first released. Even so, it’s a bit of a surprise to see a video slot version. It actually works rather well. The visuals are as good as you’d expect (there’s no Robin Williams or other members of the cast on show though) and the range of extras is impressive.

If you enjoyed the original film or its 2018 sequel then you should find plenty to like in this video slot version of Jumanji. Variance wise it’s in the middle with top payouts of 504 times your bet on each spin/free spin. If you were to play various free spins features in 1 go, you could win a lot more – I like the Stampede Free Spins feature/Wild Stampede feature as getting up to 9 wilds on the reels can be very lucrative.

For movie themed video slots, there’s plenty to choose from – NetEnt’s Planet of the Apes, Playtech’s Gladiator Road to Rome and Microgaming’s Jurassic World are recommended.