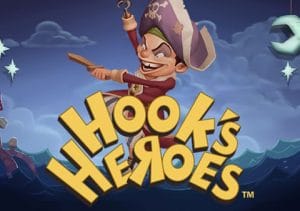 WHERE TO PLAY Hook’s Heroes SLOT

Hook’s Heroes is brought to you by Net Entertainment and it’s a pirate-themed slot game with 5 reels and 20 paylines. With cartoon graphics and a Caribbean style soundtrack, it can be played from 20p to £200 a spin. Like all the newer NetEnt releases, it can be played on desktop, mobile and tablet devices.

You can find treasure on the reels via a number of different ways – there’s a Feature Spins mode and Free Spins mode where you can choose (during the Free Spins mode) which feature you want to play for the free spins. Each feature has a different backdrop too adding to the excitement and appeal.

As for the features which are randomly triggered (in the Feature Spins mode), you have the Fairy Feature, Mermaid Feature and Pirate Feature – here they are described below:

Mermaid Feature – here all wins are multiplied by 2 (2x multiplier). If the winning combination contains 1 or more wild symbols, the multiplier will increase to 4x!

Pirate Feature – Wins are not calculated normally (i.e. on paylines) but on the number of visible symbols on the reels. Symbols don’t need to appear on consecutive reels as a result. So if you get 4 of the same symbols anywhere, it will pay out as if you have these 4 symbols on a payline.

The boy dressed as the crocodile is the scatter symbol – 2 on the reels rewards you with 1 free Feature Spins (described above) with a randomly chosen feature (Fairy, Mermaid or Pirate).

Hook’s Heroes gets interesting when you see 3 scatters anywhere on the reels. This triggers the Free Spins feature where you can choose which of the 3 features described above you want to play. If you get 4 scatters, you can play 2 features with 5 scatters giving you 3 picks.

Hook’s Heroes is a decent release from NetEnt but doesn’t quite live up to favourites like Gonzo’s Quest or the very volatile Dead or Alive. That said, it’s quirky, fun and pirate-themed which is always welcome.